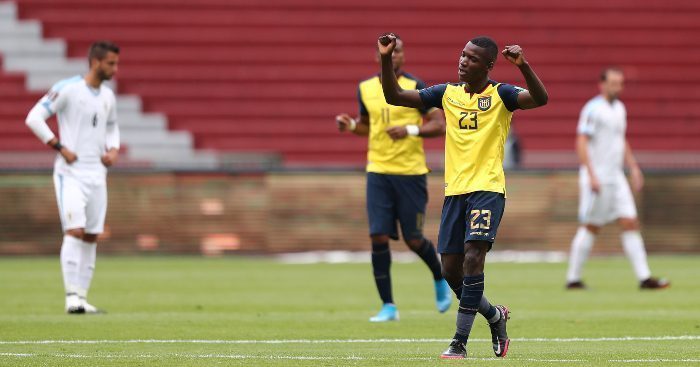 Brighton fans will have to wait a little longer for their first Premier League glimpse of Moises Caceido.Graham Potter’s side beat off a host of top-flight clubs to sign the Ecuadorian from Independiente del Valle in January, with Chelsea, Newcastle and Manchester United all said to be tracking the 19-year-old.

Likened to Chelsea’s N’Golo Kante, the box-to-box midfielder arrived on the south coast having won the 2020 Under-20 Copa Libertadores, as well as making his senior debut for Ecuador in October.

He scored the first goal in a 4-2 home win over Uruguay later in the month to become the first player born in the 21st century to score in CONMEBOL World Cup qualifying.

However, despite his impressive credentials, Potter is in no rush to unleash the teenager on the Premier League.

Caicedo was an unused substitute in Sunday’s 2-1 defeat at Manchester United alongside fellow January arrival Michal Karbownik and Potter says the duo are slowly adapting to a different style of football.

Speaking ahead of Monday evening’s clash with Everton, Potter said: “Moises has made a really good impression. Both him and Michal are going to play for the under-23s in the next few days to carry on that integration and adaptation process into British football.

“It was good for them to be on the bench and get that experience of being around the squad at Old Trafford.

“We are happy with them, but they need to keep working as well.”

Caceido, who has already caught the eye with his performances for Brighton’s under-23 side, is a step behind Karbownik who made his Seagulls debut in February’s FA Cup fifth-round loss at Leicester.

The Poland defender has not featured since, with Potter believing his development will be better served with time on the training ground and on the pitch with the under-23s.

“Michal had a slight injury when he came here, which took a bit of time to clear up. He is a young player who has benefited from being with the group and training with us,” said Potter.

“He needs more time, a bit more game time will benefit him but he’s progressing nicely as he develops into a new environment.”