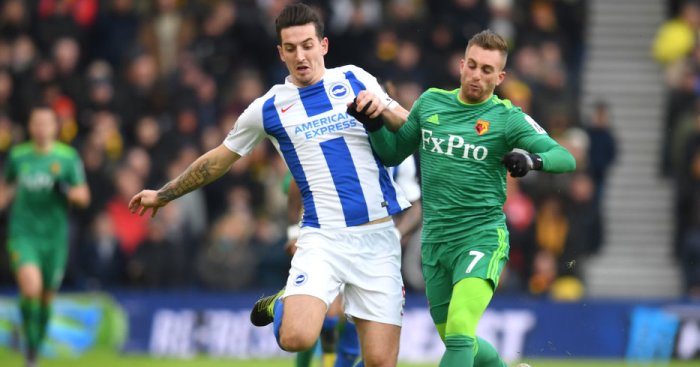 Brighton boss Graham Potter believes handing Lewis Dunk the captaincy will help bring the best out of the defender and the rest of the squad.

Dunk, 27, took on the armband for the new campaign following the retirement of Bruno, and led the team to an impressive 3-0 win at Watford in their opening Premier League game.

Potter believes England international Dunk can grow into the leadership role as the Seagulls look to push on following a disappointing end to last season under Chris Hughton.

“Lewis has been brilliant as a captain and taken on the responsibility as both a player and a character around the environment,” Potter said.

“He enjoys the responsibility on and off the field and also as his role in the centre of a back three, where we’ve used him so far.

“We’ve changed a few roles, and then you have someone like Solly (March), who is a typical wide player.

“He is comfortable to cover the ground up and down the field and I would say there’s more to come from him too, as there is with everyone in the group.”

Dunk is relishing the opportunities ahead.

He told the club’s official website.: “We have got a good group of players and a lot of good leaders in the changing room, players that are vocal before, during and after the game.

“It’s just my job to be overlooking and making sure everyone is doing everything right.”

Despite a promising start, former Swansea boss Potter maintains there is plenty of hard work ahead.

“We are still only at the start of what we are trying to do, the reality is we have still only been working with one another for a number of weeks,” Potter said at a press conference.

“That is normal, you need the competition to start to get true information, and from there you can start looking at performances.

“There is room for everything to improve and that is exciting – but the players’ application has been really impressive and is a result of the foundations that were here to begin with.”

Potter is set to take charge of a first home Premier League match on Saturday for the visit of West Ham, who were beaten 5-0 by champions Manchester City.

The Seagulls, though, should not expect an easy ride against Manuel Pellegrini’s squad, which saw plenty of summer investment.

“We are up against a tough side who will be looking to push on, we need our fans and they’ve been great so far,” Potter said.

“Hopefully we can give them something to cheer about and reward them for that.”