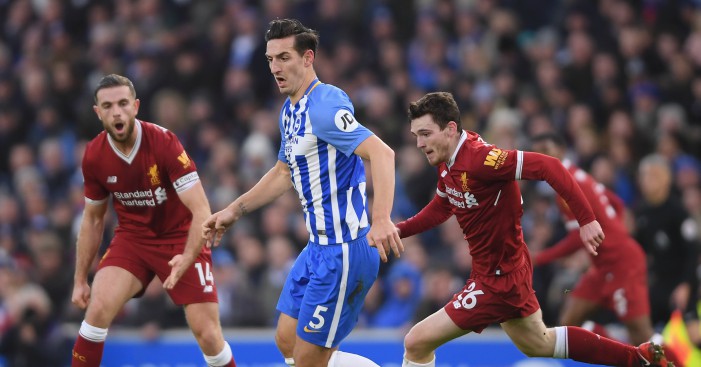 Brighton defender Lewis Dunk should have been included in Gareth Southgate’s latest England squad, according to his centre-back partner Shane Duffy.

Dunk was on Thursday overlooked by Three Lions manager Southgate for the forthcoming international friendlies against Holland and Italy.

With the start of the World Cup less than three months away and uncapped duo James Tarkowski and Alfie Mawson selected ahead of him, Dunk’s chances of being on the plane to Russia appear to be extremely slim.

But Republic of Ireland international Duffy feels there is no doubt his 26-year-old Albion team-mate is ready to represent his country.

“For me, I 100 per cent would have him in it, but I’m not English,” said Duffy, ahead of Brighton’s FA Cup quarter-final at Manchester United on Saturday.

“I think he deserves it.

“If he keeps going the way he’s going, it’s only a matter of time for him.

“He knows he’s doing well and for me he’s one of the top defenders in England so I would have him in there.”

Dunk, who came through the youth ranks at Brighton, forged an impressive partnership with Duffy last season to help Albion to promotion from the Championship.

The pair have maintained that form in the top flight this year and played an integral part in the Seagulls’ surge up the Premier League table which has left the club seven points clear of the relegation zone with eight games to go.

Speaking about their performances alongside each other, Duffy, signed from Blackburn in August 2016, added: “I think you just click when you have something good.

“He knows what I’m good at and I know what he’s good at so we don’t try and compete with each other, it’s just more for the team and it just works.

“Hopefully it can continue.”

Dunk has been ever-present in the league for the Seagulls this season and manager Chris Hughton believes the player’s international chance will come, if he can continue his current form.

“He’s very much matured as player. He’s now our vice-captain and, the fact that Bruno hasn’t been playing, has captained the team,” said Hughton.

“He has been outstanding for us this season, that’s my thoughts on him.

“He just needs to keep doing what he’s doing to give himself the best opportunity to break into it.”