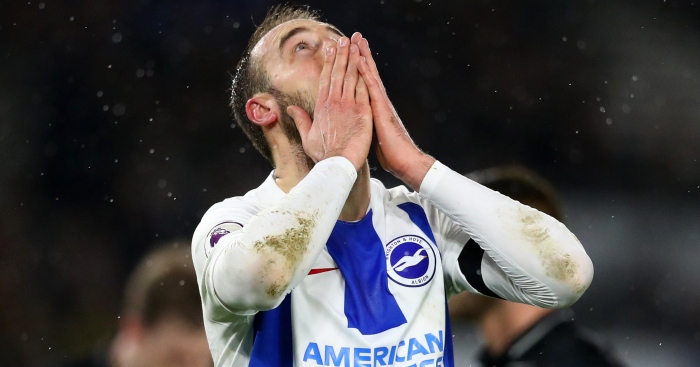 If there’s any team that’s flown under the radar this season, it’s Brighton & Hove Albion. They got off to a decent start, good enough to distance themselves from the relegation places but not good enough to draw much attention. From the second week of the season on, they’ve finished every round but one in 11th – 14th place. It’s the perfect recipe for mid-table anonymity.

But people are starting to notice now, and not in an oh-boy-look-at-that way. That’s because the Seagulls have won only one of their last 11 matches, and picked up only one point from their last five. And although Liverpool and Manchester United were among those last five opponents, so were Fulham and Burnley. Brighton have slipped down to 14th place for the first time in over four months, and are now only three points above the drop zone. What’s the explanation?

Quite simple, actually. Our old friend Expected Goals has said all along that Brighton have been over-performing. They’re not faltering, they’re just finding their level. Let’s look more closely at some stats that suggest the nature of the problem.

We’ll start with the attack. First, a huge 57.1% of Brighton goals have come from set-pieces and penalties. There’s nothing wrong with scoring that way – they deserve great credit for netting 12 set-piece goals; only Liverpool (15) have scored more. But that sort of supply line is hard to maintain, particularly since Brighton’s generally slow build-up tends not to produce many free-kicks or corners. They’re 18th in times fouled and 19th in corners gained.

Another important point: the Seagulls simply haven’t been taking many shots. All season long they’ve been in the bottom three in that category. At the moment they’re 19th, at 10.1/match. The flip side is that they have a solid conversion rate, with 9.3% of their non-penalty shots going in. That rate is certainly sustainable, but the combination has finally dropped them close to the relegation places.

And if you look more closely, you find that very little has changed in their goal totals. Through week 15, the only time they reached tenth place in the table, they were scoring 1.27 goals/match. In the 11 games since, it’s been 1.22.

So that leads us to the defence. As with the attack, shot numbers have been consistently worrying. At the moment they’re allowing 15.1 shots/match, ahead of only Burnley. Like Burnley, they block a lot of shots, and partly as a result, their GA isn’t bad, tied for 12th in the league. Mat Ryan is having a decent season in goal, ranking in the top half for shot-stopping.

In those last 11 matches they’ve conceded more goals/match from 1.4 to 1.63. But even that doesn’t suggest much of a change. It’s all accounted for by two bad games, conceding four to Fulham and three to Burnley. Those have been two of the last three matches – yet in the other they dominated Watford, easily recording a clean sheet.

The Watford match is particularly telling. Brighton are playing at roughly the same level they’ve been at all season; they’re just not getting the results they were before. The sequence that raised them definitively into mid-table came in October: consecutive 1-0 victories over West Ham, Newcastle and Wolves. In all three matches they were outshot and out-xG’d, but scored with one of their very few chances and played dogged defence the rest of the way. Against Watford they were on top in every department, but just couldn’t finish, and got only a scoreless draw.

Going farther, not only are Brighton performing at roughly the same level now as earlier, they’re also performing at roughly the same level as last season. Pretty much all their significant stats are within touching distance of last year’s totals. That figures, since the squad isn’t significantly different from last year’s, and while some players aren’t producing quite as much, others are picking up the slack.

For example, Pascal Gross’s numbers have dropped quite a bit – he has only two goals and two assists, compared with seven and eight for last season. But Solly March is having a fine year, with five assists, compared to only one all last season. Injuries have kept José Izquierdo largely out of the line-up, but the team’s set-piece proficiency has yielded seven goals for Shane Duffy and Lewis Dunk combined, compared to only one last year. And so on.

Among the newer members of the squad, there have been a few mild disappointments. Yves Bissouma is a tough tackler in midfield, and to be honest I’m surprised he hasn’t played more. But he hasn’t been able to beat out Dale Stephens and Davy Pröpper. Jürgen Locadia has two goals to his name, but isn’t quite as explosive as Izquierdo, and can’t destabilise a defence in the same way.

On the other hand, there have been a few new mild positives. Florin Andone has shown a bit of pace at striker, and has scored twice in limited minutes. Martin Montoya has held down the right-back spot competently. Bernardo looks like a find at left-back, combining pace and tackling ability. He’d be more than a mild positive if he hadn’t recently been out with a hamstring problem.

So Brighton are just about where they’re supposed to be. Their xG discrepancy has dropped to where their goal difference is only about two goals better than expected. At this same point last season, they were three points above the drop zone, and survived. I won’t make you go back to the first paragraph: they’re three points above the drop zone now as well.

And here’s a prediction: they’ll survive this year too. Why? The schedule. On the downside, they still have to play Wolves and Leicester away, and four of the top six. But two of those are Arsenal (A) and Manchester City (H) in the last two weeks of the season, where the opponents may have nothing to play for. More importantly, Brighton also play Huddersfield, Cardiff, Southampton and Newcastle – the worst team in the league and three of their direct rivals – all at home. That’s where they’ve picked up five of their seven wins. If the side are at the same level as last year’s, and don’t hit an unlucky streak, they should be okay.

Back to the beginning, then. It’s quite likely that as the season draws to a close, you won’t be taking much notice of Brighton & Hove Albion. Again. And that’s just the way they’ll want it. Of course, they’re still in the FA Cup…