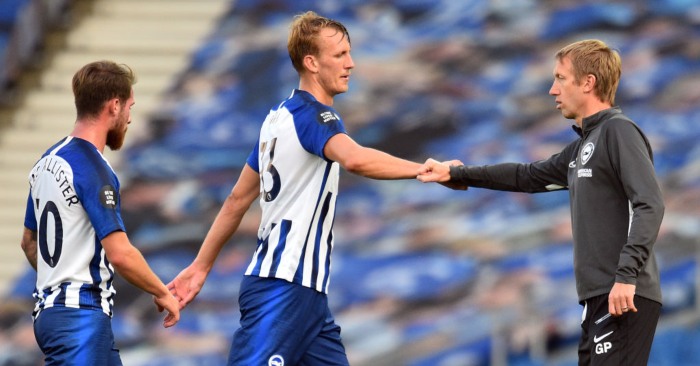 ‘Penny for the thoughts of Chris Hughton’ was the opening line from at least two reports on Tuesday night after a painful goalless draw between Brighton and Newcastle had reaped just four shots on target and literally nothing of interest other than mathematical safety for a Seagulls side that had already proved itself a cut above the real stragglers.

The implication – coming from the ‘careful what you wish for’ brigade – was that Brighton had supposedly upgraded to end the dullness but just ended up with more dullness. But we would not pay a penny for the thoughts of anyone who has conveniently forgotten that Brighton ended last season with a nine-game winless streak, relying on rivals Palace winning at Cardiff to secure their survival. The club knew they were not just playing dull football but ineffective football which would eventually only send Brighton back to the Championship.

As I wrote way back in October: ‘Brighton now have a more expansive style that could see them progress over the next three seasons and not simply keep their heads above water. That eventually leads to drowning, as it did for first Swansea and then Huddersfield, the last two teams to finish in the bottom three of the xG table and avoid relegation. You would have backed Brighton to make that a hat-trick under Hughton.’

Now some have no truck with xG and it means precious little on a game-by-game basis, but over a season it indicates a pattern and trouble can be quite accurately forecast for those teams who finish in the bottom three on xPTS but secure real-life survival, which should sound alarm bells in Newcastle if a takeover does not bring significant change. Graham Potter has taken Brighton from 18th to 13th in that table.

That’s the (expected) reward when you overhaul the playing style of a team, which is no mean feat without any real overhaul of the playing staff. Some money was spent – on Neal Maupay, Adam Webster and Leandro Trossard – but not the kind of money that made improvement inevitable. And there has been real, tangible improvement in Brighton’s playing style, with an increase from 9.8 shots per game to 12.1. They are still not scoring many goals, but they simply do not have an established top-flight striker in their ranks.

Possession has moved from 44.1% (barely more than Burnley) to 51.8% (rather more than Tottenham) and pass completion from 74.8% to 81.1%. That is an extraordinary shift in playing style – from safety-first to style-first – that has not brought the kind of points improvement that gets you mentioned in manager of the year conversations, but has brought hope that with more time and targeted signings, this is a Brighton side that can look up towards mid-table rather than down at the Championship.

This has been a season of too many draws to win over those who are still bemoaning the sacking of a thoroughly nice man over 14 months ago, and the latest one against Newcastle was particularly miserable. But this has also been a season of many, many forward steps and Brighton should be applauded for their commitment to that motion. If we paid a penny, we suspect that even Hughton might concede that his former club looks happier in their second marriage.