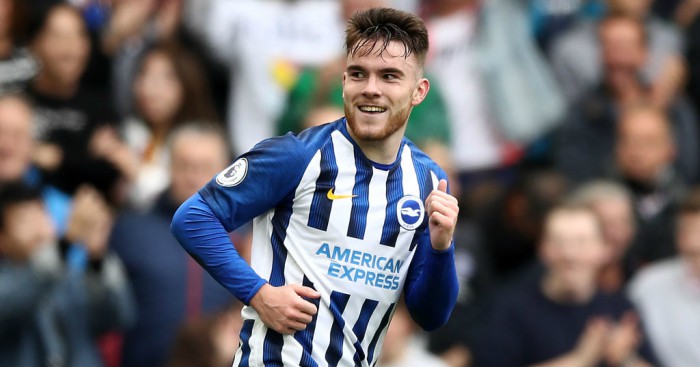 Aaron Connolly was on Manchester United’s radar before he joined Brighton in 2016, according to reports.

The 19-year-old stole the show against Tottenham Hotspur over the weekend when he bagged a stunning brace to help the Seagulls to a 3-0 victory over Mauricio Pochettino’s men.

Those two goals on his first Premier League start have earned Connolly a call-up to the Republic of Ireland senior squad with Mick McCarthy dealing with some injury concerns.

On drafting Connolly into the Ireland squad, McCarthy said: “Goals breed confidence so there will be a pep in their steps when our players train together on Monday afternoon.

“The first bonus this weekend was to see so many of our players start for their clubs, and the second bonus was the fact that some of them scored as well.

“Aaron grabbed the headlines with those two goals for Brighton and he is now in the squad. I’ve said all along that any young player who is getting first team football and playing well would be a real contender for the squad for these games.

“Aaron has got into the Brighton team, played well and scored so he deserves this chance.”

It has been a meteoric rise for the Galway-born striker after a spell on loan at Luton Town at the end of last term.

It may have been different for the teen as The Athletic claims that ‘Connolly had previously been scouted and trialled by Manchester United.’

On Connolly, Ollie Neary, his former coach at Mervue United, told The Athletic: “Aaron always had this tremendous work-rate, absolutely relentless in pursuit of defenders. He could be too hard on himself at times. He’d be gutted if he had not scored, even if his team had won 5-0. When the other boys were chatting in the dressing room, he’d be down in the gym, building up that frame.

“Every day he’d ask, ‘How can I get better?’ His finishing training was very repetitive. I’ve seen that bending finish (for his second against Tottenham) 200 times in Ireland. He reminds me of Norman Whiteside, how he would use the defender as a shield, coming in from the left side.

“Watch out for his Wayne Rooney finish, too, when he comes in from the left, uses the defender as the shield, disguises it and rasps it into the near corner. One touch inside and bang. He has a ferocious shot. The ball and the goalkeeper will end up in the back of the net. He’d score 40-60 goals every season for us as a younger teenager.

“We are so proud of him. We had a game this morning and I told the young lads, ‘Aaron was in the dressing room here three years ago. This is what you can become.’ He still comes here. He was home after the game last weekend. He flies in, spends the night, treats his friends.”