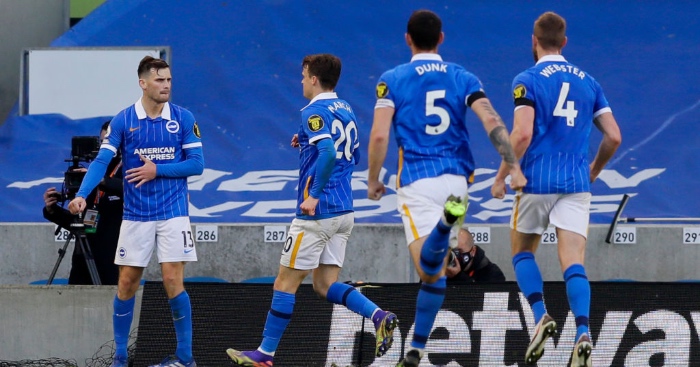 Diogo Jota had expertly dribbled his way through the Brighton box before slotting home to give Jurgen Klopp’s side the lead, only for the hosts to find a late leveller from the spot in the third minute of added time.

Neal Maupay had already fired wide with Brighton’s first penalty of the match, when referee Stuart Attwell pointed to the spot following a VAR review, and Pascal Gross made no mistake second-time round, firing the ball past Alisson Becker to level.

READ: Klopp claims ‘everything is possible’ over Wijnaldum contract issue

Liverpool had the ball in the back of the net twice only for VAR to intervene and rule both Mohamed Salah’s first-half strike and Sadio Mane’s header out for offside.

The result was enough for Klopp’s side to return to the top of the table, however their injury-hit squad was dealt a further blow when James Milner was forced off in the 74th minute as the 34-year-old started his third game in six days.

Liverpool immediately looked to put their midweek Champions League defeat to Atalanta behind them, with Salah sending a half-volley wide of the goal in only the third minute.

Despite the visitors’ dominance of the ball in the opening 10 minutes, Brighton came closest to scoring when Aaron Connolly was played through by Maupay only to shoot wide of the Liverpool goal.

Graham Potter’s side were given an opportunity to take the lead when referee Atwell awarded a penalty for a foul by Neco Williams on Conolly.

The Seagulls number nine sent Alisson the wrong way but fired wide of the goal.

Liverpool’s defensive frailties were evident again in the latter stages of the first half, with substitute Leandro Trossard firing wide.

Just as Brighton looked to be putting on the pressure at the other end, Salah had the ball in the back of the net, after being put through by Roberto Firmino, only for VAR to intervene and rule the striker offside. On review, Salah was judged marginally ahead of Seagulls defender Ben White by VAR referee Kevin Friend.

In a bid to shore up the defence, Klopp brought on Jordan Henderson on at half time for youngster Neco Williams for the club captain’s first appearance since November 8, before his injury sustained on international duty.

In the second half, Brighton looked to make the most of Liverpool’s commitment to trying to attack, Danny Welbeck managed to break through down the left and get past Fabinho, but his effort was straight at Alisson.

On the hour mark, Liverpool found the breakthrough through the in-form Jota. Andy Robertson and Salah exchanged passes down the left before finding Jota, who weaved his way through the box and the Brighton defence before slotting the ball past Mat Ryan and into the bottom corner.

The goal was the 23-year-old’s eighth of the season following his summer move from Wolves and his fifth in his last three club appearances.

Liverpool looked to have secured all three points after substitute Sadio Mane had headed the ball into the back of the net, only for VAR to intervene and rule against the goal for offside.

In added time, the referee consulted the monitor before awarding Brighton a spot-kick which was duly converted by Gross. The game had continued when VAR judged Robertson to have committed a foul on Welbeck and the game was halted and pulled back for the penalty.