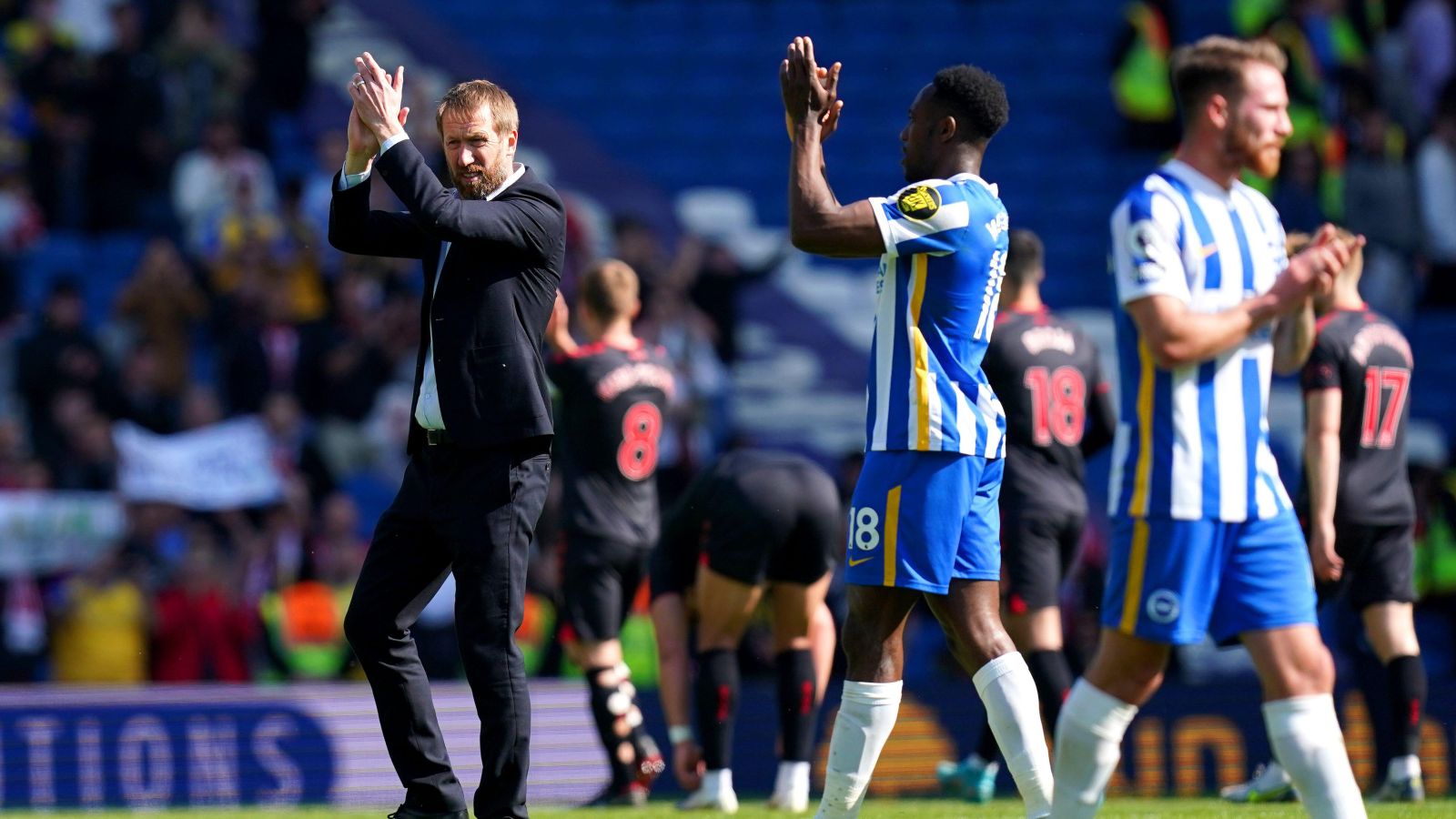 It’s an imperfect science but a list of the Premier League clubs who have already improved on last season’s final points tally is a very handy indicator of which managers should be truly heralded this season. There are exceptions: Eddie Howe for the transformative effect he has had on Newcastle United, David Moyes for keeping West Ham competitive while chasing Europa League glory and Pep Guardiola for battling on the two biggest fronts while playing some scintillating football, but the four clubs who have already – with two, three or four games to spare – surpassed last season’s totals are Liverpool, Arsenal, Wolves and Brighton.

Liverpool manager Jurgen Klopp will certainly not run short of plaudits this season regardless of how close he gets to an unprecedented Quadruple, even the most cynical Arsenal fans are starting to trust the Mikel Arteta process, while Bruno Lage has somehow established Wolves in the top eight despite never noticeably winning a game of football. And then there’s Graham Potter, on the verge of earning Brighton their first ever top-flight top-half finish. “Maybe I need a history lesson on this club,” he said when Brighton’s fans booed a 0-0 draw with Leeds. Never mind lessons; Potter is re-writing history at Brighton.

Did anybody see this coming when Brighton lost Ben White last summer and decided that the only significant money they should spend in the transfer market would not be on a centre-half replacement (or a centre-forward after the xG high jinx of last season) but on a central midfielder and a left-back? Brighton have improved while making a transfer profit this season and that’s pure sorcery, even before taking into account the swathes of failed pre-Potter signings who have now been moved on for pennies. Three years into his tenure, this finally looks like his squad.

“It’s hard to say that you can think the sky is the limit. We have to be realistic, we have to be pragmatic and also be ambitious, so it’s a tough one,” Potter said in February. “What you have got to do is to go step by step and it isn’t always obvious.”

It certainly wasn’t obvious when February and then March brought six straight defeats but the mark of a good side and great manager is their ability to regroup and regain form. Potter is always prepared to make changes – 20-year-old Moises Caicedo was recalled from loan and parked in central midfield, the defence was re-jigged and top scorer Neal Maupay was dropped. Saturday’s 3-0 away win at Wolves saw Maupay, Shane Duffy, Tariq Lamptey, Adam Webster, Steven Alzate, Adam Lallana and Pascal Gross all on the bench; that is extraordinary strength in depth for a club in the middle reaches of the Premier League.

What’s also extraordinary for a club in the middle reaches of the Premier League is their style. Only the top three enjoy more possession, only the top six have a higher pass completion rate, and only Kevin de Bruyne and Trent Alexander-Arnold create more chances per 90 minutes than Gross, who nevertheless has only three assists this season because this is still a Seagulls side that can’t finish its dinner. Just imagine what this mid-table Brighton side could achieve with even a mid-table striker.

Talk will inevitably turn to where Potter should go next, and that talk will only intensify if he achieves the tangible target of a top-half finish and even a 50-point haul. But when you listen to Potter and notice how much he uses the word ‘align’, you realise how difficult it will be to prise him away from a club that is now moulded in his image. The sky might not be the limit but the Brighton ceiling is certainly higher than it has any right to be with Potter in charge.