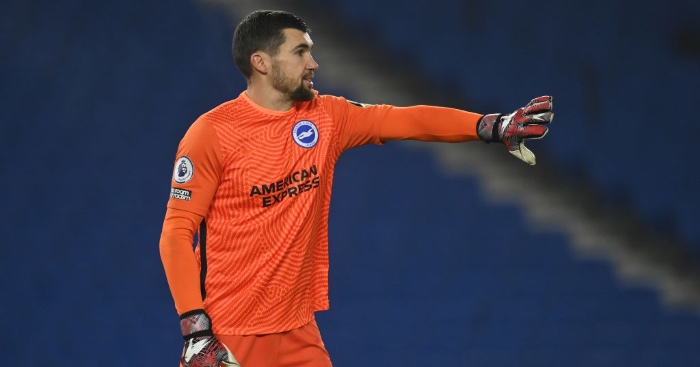 Brighton have reportedly told keeper Matthew Ryan that he can leave the club in January, with his price tag set at £10 million.

The Australian international has received less game time this campaign following the promotion of Robert Sanchez.

According to Football Insider, club officials will allow Ryan to leave the club next month if his valuation is met.

Brighton will turn their attention to 23-year-old Sanchez, who received praise from Potter in the post-match interviews.

The manager said: “He was really good, I thought he brought in quality. An important double save at the end.

“He used his feet well I thought, kicked it well and mixed it up. He’s got huge potential and it’s our job to help him fulfil that.”

Ryan didn’t even make the squad for the draw against Fulham, as backup keeper Jason Steele was preferred on the bench.

It’s an interesting turn of events for the 28-year-old, who was in impressive form last season.

He played in every single Premier League fixture in 2019/20 and formed a strong partnership with defenders including Lewis Dunk.

His performances helped Brighton to finish 15th in the table on 41 points. Ryan kept nine clean sheets during the campaign and was widely seen as the number one for this term.

But that isn’t the case, as Sanchez was brought into the first team from their development squad.

Numerous clubs in both England and the rest of Europe could make a move for Ryan. At £10 million he represents an experienced keeper for a low price, who will offer reliable performances.