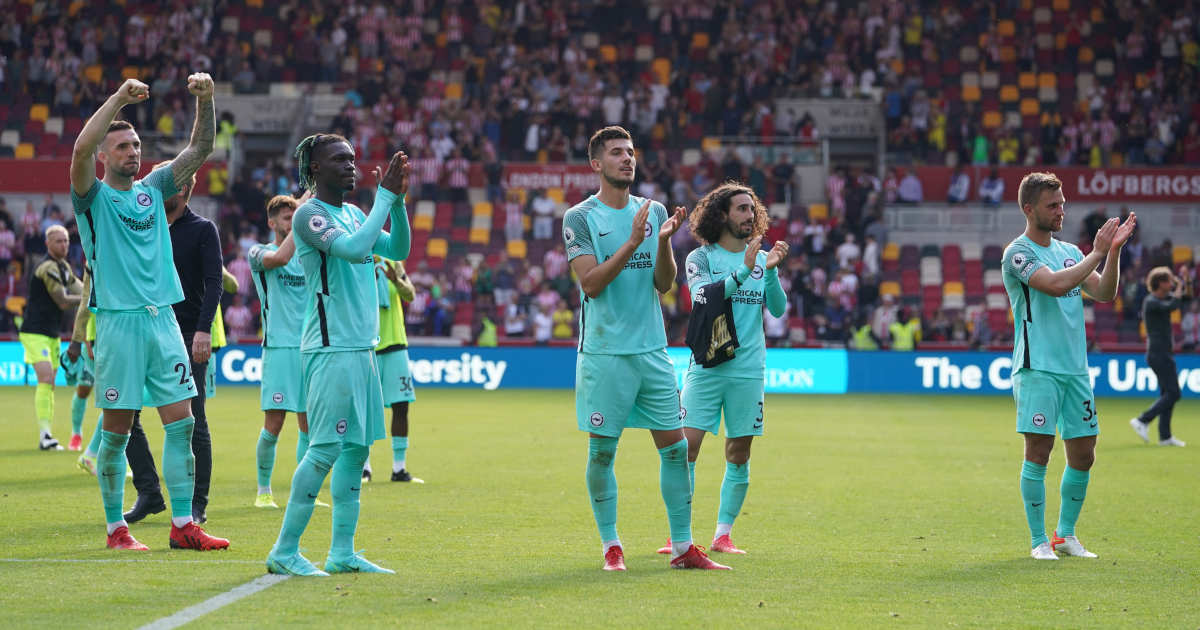 The 1-0 win at Brentford will have been extremely satisfying for Brighton owner Tony Bloom on more than one level. Bloom was in the away end rather than the directors’ box for this match, the result of a long-running feud between him and Brentford owner Matthew Bentham, who was his employee a couple of decades ago before moving on to form his own company. And even without this intriguing sub-plot, the win lifted his team – albeit briefly – to third place in the Premier League table, a position few would have considered possible this season, even though only four matches have now been played.

But Brighton’s progress is not an accident. Few other clubs have transformed themselves quite so much over the last two decades. In 2001, Brighton were midway through a run of two successive league titles (Division Three and Division Two – now League Two and League One) while playing their matches at the ramshackle and largely unloved Withdean Stadium, a temporary home into which they were forced after the club’s owners sold The Goldstone Ground for development. The one saving grace of Withdean was that it was within Brighton itself, which is more than could be said for Gillingham’s Priestfield, which was their temporary home from 1997 to 1999 following the eviction.

None of what has happened in the last 20 years has been accidental, either. The involvement of Tony Bloom, who is often sold to the world as a ‘professional gambler’ but who made his fortune through the application of data and analytics to the gambling industry, is proof of that in itself. Withdean was only ever meant to be temporary, so Bloom funded the £93m cost of building The American Express Community Stadium through interest-free loans, and the reaction of the local population has been incredible. In 2001, when Brighton won the Division Three title, their average home attendance was 6,603. By 2012, moving to the new stadium had trebled this figure to 20,028. By the end of last season, it had increased by another 50%, to 30,464.

But since winning promotion to the Premier League in 2017, Brighton have been involved in a near-continual war of attrition against relegation. Chris Hughton, who took the club into the top flight, lasted two seasons before losing his job after finishing in 17th and 15th place. Hughton’s sacking was greeted with dismay in some quarters, but the decision to replace him with Graham Potter has certainly changed perceptions of the Albion style. Last season, their playing record was identical to that of a season before, but under Potter, Brighton became known as the unluckiest team in the Premier League, with an xG tally which far outweighed their relatively lowly position in the table.

Transfer policy is a reflection of the philosophies of both Potter and Bloom. Their big activity of the summer window was as a selling club, but the sale of Ben White to Arsenal seems to have been carried out on their terms. When the £50m offer for White’s services came along, there were no long nights of the soul wondering whether they should accept. Now that the numbers themselves have gone crazy, working out what constitutes ‘value’ and what doesn’t is harder than ever, but there were few complaints among Brighton’s support when the club accepted Arsenal’s bid. The fee received for White covered the fees that they paid over the summer for Enock Mwepu (£18m), Kjell Scherpen (£4.5m), Marc Cucurella (£15.4m) and Abdallah Sima (£7m).

This season has seen Brighton start to reap the rewards of Potter’s revolution, with three wins from their first four games of the season and the only blot on their copybook so far coming with a 2-0 home defeat against Everton in the last match before the international break. Their away form has been particularly impressive, with three wins out of three; two away wins in the league at Burnley and Brentford, and a win at Cardiff City in the Carabao Cup. Few would expect Brighton to still be in the top six by the end of the season, but the league table does not lie and they’re in fifth place on merit, for now.

The biggest danger to this progress likely comes from other clubs. When the sacking of Mikel Arteta seemed imminent, Graham Potter was among the favourites to replace him, and it’s likely that when managerial sacking season does come around again after its early season period of grace, he’ll be at the top of a lot of other clubs’ shopping lists. It can be frustrating for smaller clubs – to find an undiscovered gem such as Potter, only to find themselves under the near-constant threat of losing them to a richer club, but that’s the predatory nature of the modern game.

Being ‘well-run’ doesn’t mean bankrupting your club by spending more on transfer fees and wages than it can afford or holding onto your best players until they can’t be bothered to play for anybody anymore; running a club the size of Brighton requires a balancing act, taking excellent opportunities when they’re presented to you (as they did with the appointment of Graham Potter and the sale of Ben White), and not hanging onto players or managers for too long, especially not for sentimental reasons.

If there’s one fundamental misunderstanding of Tony Bloom (and, for that matter, Matthew Bentham), it’s to equate the image of ‘professional gambler’ with someone hanging around a dog track with a roll-up tucked behind one ear and a roll of used twenties in their pocket. Bloom and Bentham are both highly capable individuals who’ve managed to make themselves extremely wealthy through the application of data and analytics to sports betting, an industry with a lengthy track record of people investing on the basis of a hunch. It should come as no surprise that Brighton & Hove Albion have been reshaped by the philosophy of their owner. It’s a philosophy that seems to be working pretty damned well.