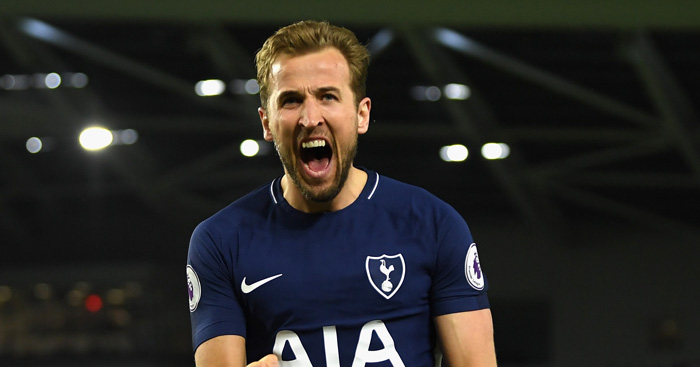 Harry Kane was on target again for Tottenham but they were held to a 1-1 draw with Brighton at the Amex Stadium.

Spurs had the chance to move 10 points clear of fifth-placed Chelsea in the battle for a top-four finish and they appeared on course to do so when Harry Kane broke the deadlock early in the second half.

However, Pascal Gross converted a penalty two minutes later to deny them victory and boost the home side’s hopes of Premier League survival.

After their 14-game unbeaten league run was ended by champions Manchester City at the weekend – and with an eye on Saturday’s FA Cup semi-final with Manchester United – Spurs boss Mauricio Pochettino made six changes to his starting XI.

Defender Toby Alderweireld, who has been struggling with a hamstring problem, made his first Premier League appearance since October as part of the rotation, while England midfielder Dele Alli was left out of the squad completely.

Spurs duly dominated first-half possession but created little and had to be alert at the other end.

Goalkeeper Hugo Lloris, making his 250th Spurs appearance, collected at the second attempt after fumbling a Lewis Dunk header, before diving to stop a deflected effort from the lively Anthony Knockaert.

Tottenham’s January signing Lucas Moura, given his first Premier League start as part of Pochettino’s changes, later threatened with a powerful drive from distance, while Son Heung-min went closest to breaking the first-half deadlock with a low shot in stoppage time which forced a fine save from Albion keeper Mat Ryan.

The game came a year to the day since Brighton ended their 34-year exile from the top-flight by sealing promotion from the Championship with victory over Wigan.

Chris Hughton’s Seagulls still have work to do to ensure they avoid an immediate return to the second tier and they were culpable of some calamitous defending for the 48th-minute opener.

A poor pass from Gross followed by indecision from Gaetan Bong allowed Son to slip into the box and, after he went down under pressure from Ryan and Dunk, the ball broke for Kane to sweep home his 26th league strike of the season.

The lead lasted just over two minutes, with the ball in play for less than 20 seconds.

Colombian winger Jose Izquierdo went to ground in the box under a challenge from Serge Aurier and regular penalty taker Glenn Murray, who has missed twice from the spot this season, stepped aside to allow German midfielder Gross to atone for his error by converting into the bottom-left corner.

Spurs had lost on their previous visit to Brighton back in 1983 but, after the setback of the equaliser, it was the away side who looked more likely winners.

A powerful, driven cross from Christian Eriksen was diverted narrowly past the post by Shane Duffy, while substitute Erik Lamela stung the palms of Ryan.

Pochettino, perhaps with the meeting with Jose Mourinho’s United at the front of his mind, withdrew Kane with five minutes remaining and his side were forced to settle for a point as Albion dug in for a draw which was celebrated joyously by the home supporters.