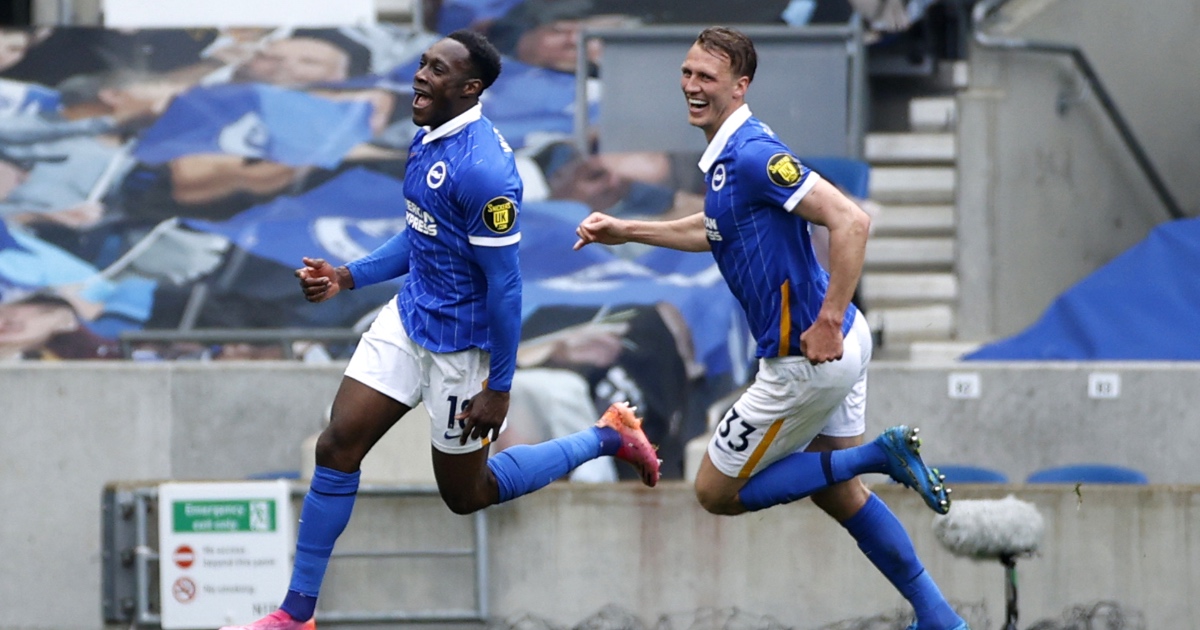 Former England forward Welbeck rifled home 11 minutes from time at the Amex Stadium after executing a perfect Cruyff turn on a dropping ball to secure a precious three points for the Seagulls.

Pascal Gross put Albion on course for only a third top-flight home success of the season by converting an early penalty after Ezgjan Alioski hauled down Welbeck in the box.

Albion’s victory piled further pressure on 18th-placed Fulham in the scrap for safety and would have been far more comfortable had Leandro Trossard and Neal Maupay not spurned golden chances.

Mid-table Leeds, who were without influential midfielder Kalvin Phillips, had plenty of possession on the south coast but fell well below their dynamic best and created little.

Defeat for the West Yorkshire club brought to an end their best top-flight run since the days of David O’Leary in November 2001 and dented their outside hopes of European football.

The surprise absence of England midfielder Phillips was a major talking point ahead of kick-off, while Brighton defender Ben White returned from a one-match ban to face the club with whom he won the Sky Bet Championship title during a standout loan spell last season.

Leeds were back in Sussex for the first time since suffering an embarrassing FA Cup third-round exit up the A23 at League Two Crawley in January.

Brighton won 1-0 at Elland Road six days after that match and began with the intensity of a team eager to ease relegation fears by recording a league double.

Trossard tested Leeds goalkeeper Illan Meslier twice in quick succession in the early exchanges before the Seagulls ended a three-game goal drought to edge ahead.

Alioski clumsily upended Welbeck in the area and Gross confidently found the bottom left corner with the resultant spot-kick, despite Meslier going the right way.

The visitors gradually worked their way back into proceedings but were extremely fortunate not to fall further behind five minutes before the interval following a defensive wobble.

A quick Pascal Struijk free-kick deep inside Leeds territory led to the under-pressure Diego Llorente being dispossessed by Welbeck and, after the ball was worked back across the area, Belgium forward Trossard somehow blazed high and wide with the goal gaping.

With Brighton having dropped 20 points from winning positions this term, head coach Graham Potter would have been concerned to see more chances come and go.

Welbeck flashed a low shot across goal just before the whistle, while Joel Veltman rifled over immediately after the restart.

Leeds top scorer Patrick Bamford was isolated for much of the afternoon and was replaced by Rodrigo on the hour mark as Marcelo Bielsa sought greater spark in pursuit of a leveller.

Despite the attacking alteration, the chances continued to be concentrated at the other end of the field.

White headed on to the roof of the net against his former side, while unmarked Frenchman Maupay – who has four career goals against Leeds, including the winner in the reverse fixture – wastefully scuffed wide after being expertly teed up by Trossard.

Brighton’s inability to put the game to bed meant the result remained in the balance going into a nervy final quarter.

Stuart Dallas, who has seven goals for the season, volleyed narrowly over as Leeds briefly threatened to snatch a draw.

Albion fans were eventually able to breathe a collective sigh of relief just before the contest entered the final 10 minutes courtesy of Welbeck’s moment of magic.

Defender Struijk hoisted a clearance into the air and, as he went to close down the loose ball, Welbeck expertly whipped it away from him with a deft touch before smashing low across goal into the far corner to claim his fifth strike of the season.

Albion’s welcome victory was a first in five games and prolonged Leeds’ 12-year wait for success in Brighton.