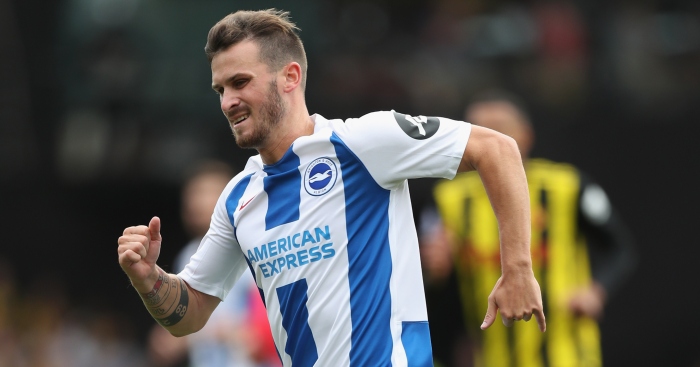 It’s time for a statistical analysis of Brighton & Hove Albion’s season so far. Why? Because it’s there, of course. But also because, while the attention of Premier League fans has mostly been elsewhere, Chris Hughton has been quietly (of course) overseeing a quiet (of course) revolution at Falmer Stadium. Or, if you prefer, the Amex.

Admittedly, if you look at the table, not much has changed. The Seagulls are just about where you’d expect them to be. They’re in 14th place, very close to the 15th of last year. They have four points from four games, which for a full season would mean 38, very close to last year’s 40. They’ve even beaten Manchester United at home, just like last season. Status quo.

But although the results are similar, the Seagulls are playing the game differently. Last season they took the cautious approach, mostly sitting back and letting the opposition come on to them. That’s always been Hughton’s bread and butter. But this year he’s knocked over the table. Brighton are defending aggressively, with significantly more pressing.

A dramatic example of the change is demonstrated in their games at Anfield. Both last year and this year Liverpool had by far the bulk of the possession, 72.3% last year and 70.0% this. Both times they spent most of the match in the Brighton half. The statistic which best measures the pressure you apply in your own half is interceptions. Last year Brighton had nine. This year? 29. That’s not a typo.

Another revealing team stat is clearances. Sides that play passive defence tend to have more, for obvious reasons. Last year Brighton finished fifth in clearances, behind other conservative teams Everton, Burnley, Stoke and Newcastle. This year they’re in a tie for 15th, ahead only of West Ham, Chelsea, Liverpool and Manchester City.

The aggressive approach has also led to more physical contact. They’ve jumped from seventh to first in total fouls committed, and from 20th to tied for 10th in fouls suffered. In that Anfield match last year they committed only six fouls. This year it was 14.

So there’s no question about the change. But, as suggested above, the results aren’t significantly different. Shots for and shots against, and all the xG-type stats, are also relatively close to where they were last year. It’s early, of course. While four matches are enough to show the style change, we won’t know if the results will improve until we’ve seen a lot more. Hughton is clearly betting that they will.

There’s one player in the side for whom the bet may not be worth it, though: Pascal Gross. Last year he was unanimously regarded as The Transfer Bargain of the Season. But the new system doesn’t fit his skill set. He’s a deliberate, technical player who flourishes best in a patient approach. He’s also one of the slower midfielders in the league; he’s just not suited to aggressive, up-tempo play. So far this year he has yet to register an assist or a non-penalty goal.

The defensive stats show his problem even more clearly. Dale Stephens’ tackle and interception numbers are up 18% and 32% respectively; for Davy Pröpper it’s 24% and 53%; Anthony Knockaert checks in at an impressive 93% and 56%. But Gross’s tackles and interceptions are both almost exactly the same as last season. It’s just not his game.

It’s no coincidence that Brighton’s one goal this season that came from the press took place when Gross was off the pitch. This past weekend against Fulham, he was replaced on the hour mark by new signing Yves Bissouma. Seven minutes later, Knockaert intercepted a pass in the attacking half, Bissouma cleared out space on the counter, and Knockaert passed to Glenn Murray for the finish.

So there’s more drama on the south coast than you might have thought. Hughton is starting the season with a different system, one which could very well marginalise the man we all assumed was his best player. There’s no way yet to know whether he’ll stick to it, or what the effects will be. But we know where to find out. The manager can be as quiet as he wants, but whatever he does, the numbers will speak volumes. It’s worth listening in.