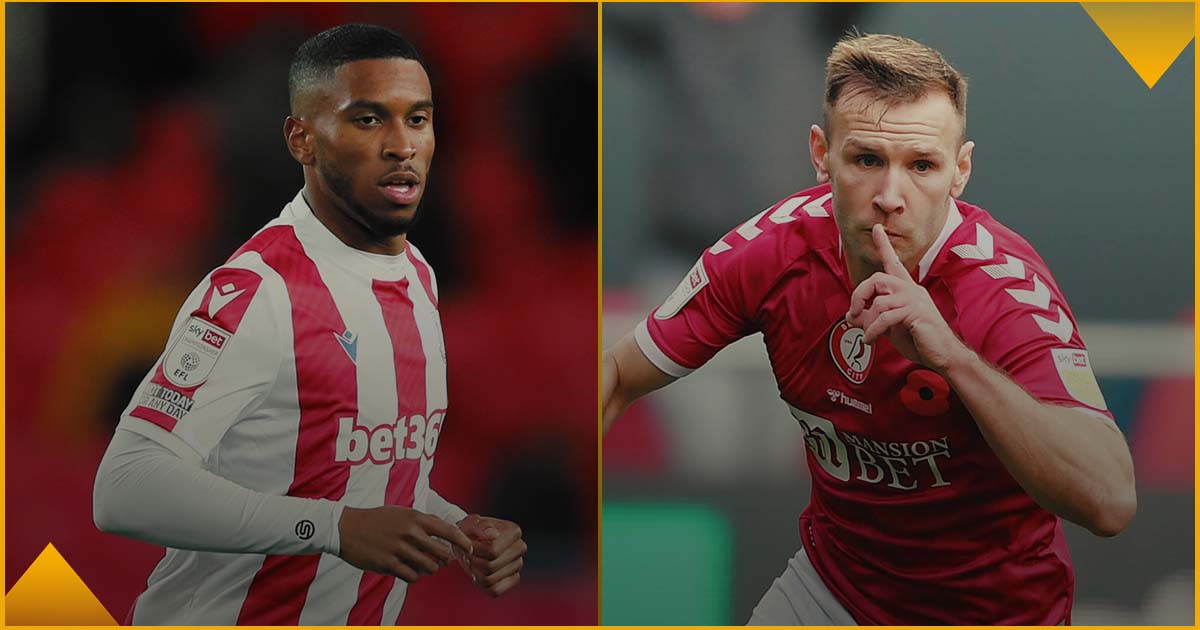 We’re back for some midweek Championship action and our attention turns to Ashton Gate as Bristol City take on Stoke, with odds from Betfair throughout.

Setting The Scene – Ships Passing In The Night?
Bristol City and Stoke City feel like they are in very different places than they were a couple of seasons ago. For Stoke that’s probably a good thing, not quite so for Bristol City. At the end of the 2018/19 season Bristol City recorded an eighth-placed finish in what was a highly competitive Championship year, their highest finish since promotion and a fourth season of successive improvement. Stoke, by contrast, in their first season back in the Championship after relegation, languished down in 16th spot, a long way from where many had thought they’d be after a big summer spend and the hire of Gary Rowett as manager.

The roles have now reversed. As 2019 gave way to 2020 and 2021, Lee Johnson gave way to Dean Holden and Nigel Pearson, and Gary Rowett gave way to Nathan Jones and now Michael O’Neill. Stoke look like they’re finally punching their weight after making a fool of my pre-season predictions the past three years, and sit in fourth position going into this clash at Ashton Gate. Things may stretch out ahead of the Potters in terms of the top two, but I’m sure their fans would appreciate just being anywhere near the play-off picture after finishing 16th, 15th and 14th since being back in the Championship. Bristol City no longer look like the upwardly mobile club they did in 2018/19 and hope this season is the start of a trend back up after a very transitional-looking 19th place last season that saw the arrival of Pearson as boss, and equally pertinently Richard Gould as CEO.

In short, Stoke fans will definitely be happier after this game if the result matches the current direction of travel of both clubs.

One To Watch – Andi Weimann (Bristol City)
Given Bristol City’s current location in the table and general form, it’s somewhat of a surprise that they have a pretty effective pair of goalscorers. I’ll stop short of saying a front two, as Pearson has tried all kinds of shapes and selections to try and get the Robins going, but Chris Martin and Andi Weimann have hit 12 goals between them so far this season. The evergreen Martin has been around forever at Championship level and is responsible for five of those 12 goals; if he gets one more it’ll equal the number of current Championship clubs he has represented in his nomadic career. The other member of the goalscoring double act, seven-goal Weimann, is proving to be a highly useful player at Ashton Gate this season, and not just for his goals.

This column has already alluded to Pearson trying to settle on a strategy at Bristol City – 24 players have represented the Robins already this season, and Pearson is not afraid to experiment with new systems, positions, or even new players debuting from the academy. The one constant in the lineup for Bristol City, other than goalkeeper Dan Bentley, is Weimann, who if you trust the data I’m looking at now, has been utilised in every central and right-sided position from midfield through to the top end of the pitch this season.

Weimann has great pace, and his running power can be a key asset off the base Martin provides, but an ability to join in with the midfield seems to give him the nod over a more dedicated finisher like Nahki Wells. What also stands out about Weimann is his seven goals have seen the Austrian score two in a game on three occasions already this season. Bristol City have only won five times this season – three of those wins have come with the help of Weimann doubles, so it’s pretty safe to say that if he’s on his game, the home side are in with a chance.

One To Watch – Romaine Sawyers (Stoke City)
The pickup of Romaine Sawyers by Stoke on loan from West Brom in the summer was a revealing bit of transfer dealing. The first thing it told us is that new Baggies boss Valerian Ismael didn’t particularly fancy Sawyers, and the ex-Barnsley boss immediately added to his midfield by taking his captain Alex Mowatt with him from Oakwell across to The Hawthorns. The deal also told us that Stoke had got themselves a highly functioning Championship midfielder, who despite not being wanted this season by his parent club, started 42 of 46 games for West Brom as they were promoted in 2019/20.

Prior to his West Brom promotion, Sawyers was very much a Dean Smith guy, working under the newly-appointed Norwich boss at Walsall and then Brentford. Sawyers was very much a ball circulator down at Griffin Park. Those fans who like a bit of blood and thunder in their midfield probably didn’t appreciate his languid style, but the Brentford metrics team surely loved Sawyers’ ability to keep the ball moving and those excellent passing stats.

Stoke fans would probably admit they weren’t the most exciting team last season, often sitting in and relying on the goals of Nick Powell, and badly missing the injured Tyrese Campell. This campaign with Sawyers, as well as Mario Vrancic recruited, Stoke now have a different string to their bow in midfield. We have seen glimpses of a new-look passing Stoke City this season and in Sawyers they have an expert in midfield ball circulation who knows his way to a Championship promotion.

Key Battle – Mind Over Matter
Apologies to Stoke fans, but this key battle exists almost exclusively in the heads of the Bristol City players, and it’s a battle that has driven Robins fans mad over 2021. Normally sides rely on their home form, familiar surroundings, and home crowd to fire them to victory, with things being a little trickier on the road. Look at Stoke this season as a perfect example: the fifth best team in the division at home, two-thirds of their points scored there, and sitting comfortably in the play-off places.

Bristol City have become the polar opposite. Their away form has been surprisingly good, and prior to the recent run of three consecutive defeats they were the best away side in the division. At home, however, they have been dreadful, and having ended last season with a hopelessly bad run at home, they’ve unfortunately carried on where they left off this season. Since January 27 the home league record at Ashton Gate reads like this: played 19, won 1, drawn 6, lost 12. It’s not just the points total that’s troubling but the psychological and mental frailty that has seen Bristol City throw away many an advantageous position, often extremely late in the game. The one victory at home in 2021 tells us plenty: it was against struggling Barnsley, who fired their manager after the game, and the scoring was all done before half-time.

It almost feels like for Bristol City fans and players not to be overcome with anxiety, they need a two-goal lead going into stoppage time at Ashton Gate for things to be even remotely comfortable. Football can completely swing on issues of mind of matter, but you do feel that given the big gap between the two teams in the league table, unless Stoke are put to bed early by Bristol City, those late-game nerves might play perfectly into Stoke’s hands.

Inside Insight – Bristol City: (AH Robins Talk @AnirudhHarish5)
As we’re all aware, Bristol City’s home form of recent has not been up to scratch and they’ll have to be in BS3 again on Wednesday against Stoke City. One win in 19 at Ashton Gate will prove just that. A draw at home to Blackburn does make it four points in two at home, but the performance in the second period was all too familiar. Another attempt at trying to protect a single goal margin failed dramatically and a goal for Rovers 15 minutes from time forced City to settle for a point.

We’ll certainly be hoping to make it three unbeaten at home against a strong Stoke City side. Potential rumours of midfielder Matty James returning to the side can only be a positive for Bristol City as they really struggled to control possession with Blackburn having a measly 37% possession in the second period. A midfielder with the ball ability of James will help against the Stoke middle three.

A start for youngster Ayman Benarous is possible, but I suspect that he will be retracted from the XI. Joe Williams also started after sustaining an injury against Bournemouth. A back three was used and Nigel Pearson might have to stick with it if City are to match up with Stoke. Goalscorer Callum O’Dowda might keep his place, but with no natural fullbacks last time out, City could contemplate the return of George Tanner.

Inside Insight – Stoke City (@Homzy)
After three straight wins and clean sheets, you might think that Stoke fans are looking up rather than down, but that isn’t necessarily the case. Stoke didn’t play particularly well in any of those games, certainly in an attacking sense, and with Joe Bursik and Harry Souttar added to the long-term injury list, we’re far from at our best right now.

That said, Stoke have added a real cynical side to their game over these past three weeks, no doubt as a direct response to throwing away a three-nil lead to draw at home to Cardiff, and being able to grind out wins without playing well is in direct contrast to earlier in the season when we looked capable of blowing teams away but just didn’t quite have enough puff up front.

The challenge now is to bring performances and results together. Tyrese Campbell could be the man to do that if he can kick on from his first goal back from injury, but Stoke badly struggled to build out of the back against Peterborough – they had just 37% possession – and Michael O’Neill needs to find a solution for that without Souttar quickly.

I don’t expect it’ll all click into gear against Bristol City, but given their struggles at home and our sudden ability to sh*thouse, it’d be a disappointment if we didn’t come away with something. Just don’t expect a thriller.