Home Chelsea The British media and the ‘mad foreigns’: A worrying trend 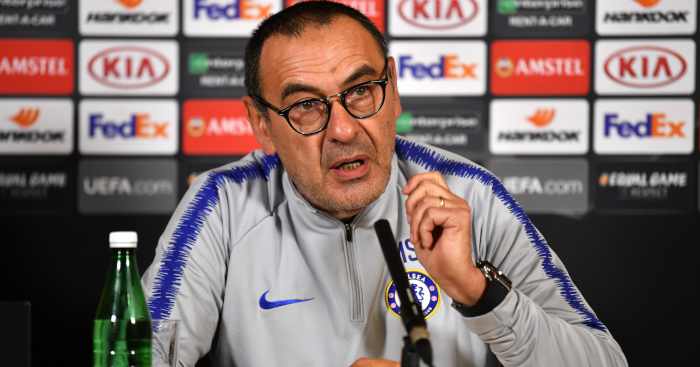 You may have noticed that Maurizio Sarri is not very popular with some Chelsea fans and may not even be their manager in the very near future. And if there’s one thing our tabloid press loves, it is pouring buckets of petrol on even the tiniest of smouldering embers and thus setting a blaze they can stoke and fan for months, just to create content to fill space.

Indeed, Sarri’s short tenure has been a textbook example of the anti-foreigner dog whistles routinely deployed by elements of our press, always with just enough plausible deniability to pretend it is anything to do with nationality. And indeed, I’m not sure if it is actual xenophobia or actual racism. It is discriminatory, certainly, and it can be disrespectful too. So it’s something. Whatever it is, you will not hear the next boss – if it is Frank Lampard – talked about in the same way.

Sarri is referred to by Andrew Dillon in The Sun as ‘a former banker’. This is a classic tabloid bit of anti-intellectualism. How dare someone in football have not worked in football at some point? It’s weird, untrustworthy, almost. Incidentally, the same attitude is applied to any reported non-British managerial interest in art, music, literature, theatre or politics. See also: Fabio Capello. Possible subtext: Not a man of the people. Weirdo. Too clever by half. Lacks commitment to the job due to being interested in things other than football.

Note also how often a foreign coach is described as ‘eccentric’. In Sarri’s case this is because he puts his glasses (or ‘bins’ as Neil Ashton would have them, like he’s living in a 1930s Will Hay movie) on his forehead, as though no-one else has ever done such a thing. Being tactically detailed or smokin makes you – according to Dave Kidd in The Sun –  ‘an eccentric, almost pitiful figure, obsessed with chalkboards and Marlboro Lights’.

If results are good, then the foreign manager is a mysterious aetheste or wizard with strange exotic ways that are celebrated as if they are some sort of superpower. Look at how they talk of Pep Guardiola. He doesn’t eat on match days and is ‘intense’. Being intense is very foreign, it would seem. Other weirdness can be anything from insisting on two training sessions per day, to not letting players have tomato sauce, to making players have a kip at the training ground during the day, which I’m sure we can all agree are as bonkers are running around with a carrot up your arse singing Gilbert and Sullivan songs through a megaphone whilst knitting a balaclava. See also: Marcelo Bielsa.

But eccentricities are only positives if the results and quality of football are good. But if things go badly, the exact same habits will be portrayed as ‘losing it’ or of being desperate or odd. This has been how Sarri has been portrayed for months and has now become a point of view which is unshakeable, despite the fact that they had a really good season. That’s why he has been said to be ‘floundering’ even whilst making two cup finals and finishing third behind two wonderful teams. I guarantee that if Lampard matches those achievements he will never be said to be floundering at any point.

If you’re not British, once you become defined as rubbish – and that can happen within weeks – there is rarely any redemption and even your highly notable achievements will be painted as inadequate, as not matching the entirely fictitious expectations that they and they alone have invented. When a player makes a supportive statement – as David Luiz did of Sarri – you will, if you’re John Cross, call it ‘remarkable’. Remarkable only because it contradicts the fiction that has become such a default that it seems forgotten that it was indeed an invention in the first place that all the players hate this weird man. It is perverse.

Of course the foreign manager that ‘snubs’ a (British) club legend who should be ‘immortalised’ like, say, Gary Cahill, can always expect a kicking for such heinous disrespect. Even though he will also have ‘snubbed’ other previous silverware winners too who are not British, this will be largely ignored. And when a team loses a game without having an English captain like Gary Cahill on the pitch, you know that the foreign manager will get it in the neck for not picking him. It’s almost like being British is better than being foreign, which brings us to Not Getting the Club.

‘Not getting the club’ is really just another byword for being foreign, but again, with enough plausible deniability to give the proponent wriggle room. A British manager will rarely be said to not ‘get’ a club, the consequences of which often lead to players ‘downing tools’. And that’s the litmus test. Whenever you hear how a foreign manager is being discussed, consider if you’ve heard a British coach talked about in the same way. See also: Descriptions of black players and their lives.

Of course in this bizarre world, foreign managers are often ‘a big risk’ and they might underestimate the job because ‘they don’t know the league’ and this is another reason to either doubt them before a ball is kicked or doubt them as soon as they prove to be even slightly flawed. This despite the fact no Englishman has won the league for 27 years and only two have triumphed in the last 34 years. An English or British manager has never been said to be a risk or to have underestimated the holy Premier League because somehow by virtue of some kind of footballing osmosis, they do ‘know the league’. Whereas it’s foreign to foreigners innit? I think that’s how this warped logic goes anyway.

Foreign coaches are also more often than not – if the press and pundits have heard of him previously, which isn’t a given (see also: Marco Silva) – associated with a ‘philosophy’, whether it is Sarriball or gegenpressing or anything else involving pivoting and ghost nines. When things go well, this is a tabloid marker for your weirdo foreigner coach’s highbrow intellect. However, when they go ever so slightly less than well, we’ll be told that the philosophy ‘was supposed to transform English football. Everybody was supposed to be addicted to it, overwhelmed by the latest trend shipped in from Italy’ which is what Sarri has had to endure, even though a) no it wasn’t b) no we were not and you’ve just made all that up to get at him.

By the end of it all, the mad foreign has let down the whole of English football with his ‘wild and illogical’ ideas. He has sold us a pup. He was going to make life better for all of us and he’s let us down, probably because he doesn’t know ‘how to dig in’ which is something all British managers know how to do, again by some weird sort of cultural osmosis. Subtext: Pretentious middle-class liberals massively over-rate foreigners, hate the English and none of them have the stones for a fight. See also: Guardiola’s first season at City.

I’m sure you’ll recognise all these quotes, as I’ve pulled them from various Mediawatch pieces, and they are just scratching the surface. A massively thick book could be written documenting how non-British coaches are routinely and repeatedly treated differently to natives by some sections of the British press and punditry. I don’t think I’m being unreasonable in thinking this is really odd and reflects something deeper.

Those involved might argue they merely reflect public opinion and perhaps after so many decades of them promulgating such attitudes, it does. But we’ve seen players booed even when playing for their country on the back of negative press reports so we know some, maybe many fans, can be swayed in their thinking by this constant background noise of a very specifically honed lexico.

The writers surely know their influence, which makes their – shall we say – peculiar way of talking about foreign managers troubling. Are they playing up to a xenophobic element in their readership because it sells? Are they plugging into an intolerant English anti-foreigner attitude because it sells? Are they doing so knowingly, or is it subconscious, is it under editorial or ownership instruction, or rather has it simply become an unthinking default? Maybe I’m being naive but I don’t believe any of those writing this garbage are xenophobic or worse. I just can’t believe that. It just seems very unlikely.

But whatever it is, it certainly exists. So what is it? And more important still, what do we do about it?