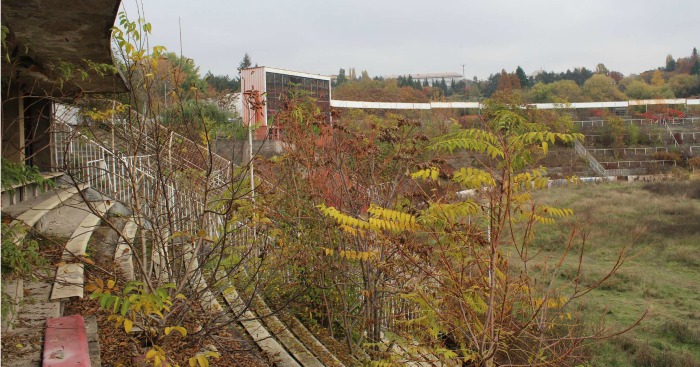 I didn’t live here then. As far as I knew, the team had always played at the small, unlovely stadium in the northern part of the city. I wasn’t even born during the glory years (one league title in 1978) and wasn’t aware of any of the great European nights (a 7-4 aggregate victory over Inkaras Kaunas in a UEFA Cup qualifying round, 1997).

It was only when, some years back, wandering through the city I now call home, I came across the hulk of a crumbling, graffitied concrete bowl; severe and workmanlike in the style so beloved of the Soviets, standing alone and silent between an abandoned supermarket and some fields.

The city is Brno, capital of Moravia, the south-eastern region of the Czech Republic. A lively city, though often overlooked for the charms of Prague, two-and-a-half hours north-west. For fans of sport, it sidles into shot once a year when the MotoGP crowd visit, before returning to a laid-back obscurity. However, for someone like me who spent a fair chunk of his teenage years (and probably too much of his twenties) playing Championship Manager, I was surprised that I’d never heard of the city in a footballing context. The former Eastern bloc had been an evocative collage of names – Spartak, Dinamo, Red Star, Lokomotiv, Partizan, Rapid – and yet Brno seemed a curious blank.

It turned out Brno did have a team, although not a particularly inspiring one. They were called 1.FC Brno and were a solid mid-table outfit. (They’ve now reverted to their historic name, Zbrojovka Brno). I located the ground on a map and ventured out there for the first home game of the season. Cheap tickets, beer, and a small but vocal Ultras section meant I kept returning – occasionally at first, but eventually to every home game and, after a couple of seasons, a smattering of away games too.

Only one thing puzzled me. Why was an ostensibly ambitious team, in a big city, with (admittedly only a bit of) history, playing in a small, old-fashioned suburban ground? On my travels I’d been to much smaller towns with much finer, more up-to-date stadia than this.

So what had happened? In the spirit of investigation I wandered out to the site of the old stadium and, yes, there it was. An empty shell; trees growing on the pitch, the stands cracked and buckled, evidence of the homeless taking shelter in the tunnel, goalposts rusting away, and an eerie silence hanging heavily above.

At home, I Googled the Lužánky stadium. Grainy photos from the 1970s as thousands saluted Zbrojovka winning the Czechoslovak league. The national team thumping Finland 4-1 there in 1995. Then, on YouTube, I found footage of a 1-1 draw against Slavia watched by 44,120 fans in 1996, still the highest attendance for a Czech league game.

Brno had only left the stadium in 2001. What had started as a temporary switch had become a permanent move as money, politics, business concerns and backhanders saw the fate of the stadium passed between a number of uninterested parties for years until, eventually, it was agreed that it was beyond saving. Time appeared to be up. However, earlier this year, a rather unlikely figure came bounding onto the scene.

Petr Švancara was born in Brno, and came through the club’s youth ranks, eventually playing 55 games before being transferred to Slavia Prague. A forward whose natural talent should, possibly, have yielded more goals than it did, he returned to his hometown club twice more during his career, establishing himself as a cult hero due to his light-hearted nature and crowd-pleasing on-pitch shenanigans.

In February 2015, he called a press conference in which he announced that he would be setting up a charity game which would also act as his testimonial. The game was to be played at Lužánky. At the end of June. Five months away. He would be doing this, he said, to prove that the city of Brno loves the old stadium and that it wouldn’t require a huge investment to bring football back there.

A lot of people thought it was a waste of time. However, the crux was this: he drew on an old ideology. The Czech National Theatre in Prague was built using public money in the 19th century as a physical embodiment of the Czech will for identity and independence. “Národ sobě” – “A nation unto itself”. By the people, for the people. Soon, Švancara was all over the local news doing pieces to camera from the waist-high undergrowth of the former pitch and, within a fortnight of the initial announcement, the first of many ‘work weekends’ took place. A group of volunteers, Švancara included, turned up on the appointed Saturday armed with axes, shovels, chainsaws, buckets and brooms. And soon, every other weekend became a ‘work weekend’.

Within a month, the undergrowth was cleared and the pitch relaid. Within two, 25% of the old stands were cleared of trees and rubble. The fire brigade started sending volunteers with axes to clear the worst areas. Building firms started supplying materials and equipment. The local brewery, Starobrno, sent down kegs for the workers. And virtually every time, Švancara was there; spade in hand, joking, pouring beers for his volunteers.

It ended with one final day of work, free beers and goulash for everybody, and a visit by the current first-team squad, en route to Plzeň to play table-topping Viktoria. My friend Dan and I had volunteered for some of the previous weekends so, as we sat there under a clear blue sky, beers in hand as journalists filmed Švancara ladling out goulash to the workforce, we felt proud that we had contributed something to this wholly remarkable project.

The game was a resounding success, and there will be a follow-up friendly against Rapid Vienna at the end of this season. Plans have now been drawn up for a full-scale renovation to bring it up to 21st century standards. A wholly remarkable project. By the people, for the people.