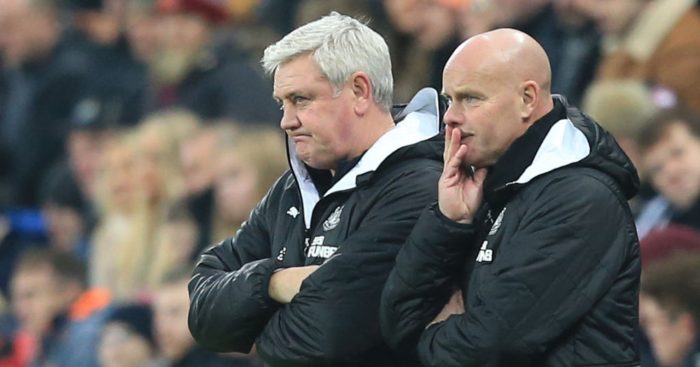 Newcastle head coach Steve Bruce has blamed the gruelling festive programme for the injury crisis he faces ahead of Saturday’s FA Cup third round trip to Rochdale.

The Magpies were forced to play the final 39 minutes of Wednesday’s 3-0 Premier League defeat by Leicester with only 10 men after Jetro Willems, Javier Manquillo, Jonjo Shelvey and Fabian Schar had limped off.

With Jamaal Lascelles, Ciaran Clark and Paul Dummett already sidelined and Florian Lejeune in desperate need of a rest after playing four games in 12 days on his return from a second long-term knee injury, Bruce has just one of his six central defenders available this weekend.

He said at his press conference on Friday morning: “I was in at 6.45am with the doctor to find out. Look, it is what it is. I’ve never known a 15-minutes like it.”

Bruce continued: “I did predict a month ago that the schedule was ridiculous and we don’t have the resources to have huge rotation, so unfortunately when you keep asking players to play tired…

“Up until Saturday, our record for this season was far better than last year in terms of injuries, especially soft tissue injuries.

“Matt Ritchie and Lascelles in particular were impacts – there’s not much you can do about that – and the one thing you want to be doing with the sports science that we have today is the prevention of injuries and especially soft tissue injuries.

“For me, it’s just the number of games in a short period of time and asking footballers to play tired, and unfortunately we’ve picked up the consequences of it, so it is what it is. We have to accept it and move on.”

Ritchie, who suffered a nasty ankle injury in August, could be included among the substitutes at Rochdale, but Willems, Manquillo, Schar and Shelvey will all be missing.

However wing-back DeAndre Yedlin, who played on with a damaged hand against the Foxes, is expected to be available.

Bruce said: He’s got a terrible hand injury but fortunately it’s not broken. He’s going to be OK.”