Home Aston Villa Bruce: Cabbage assault ‘sums up the society we are in’ 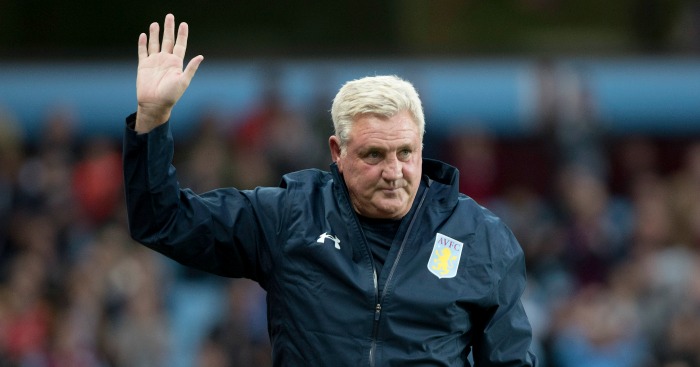 A cabbage was thrown at Aston Villa boss Steve Bruce before a chaotic 3-3 draw with Preston as the under-fire manager condemned a lack of respect.

The 57-year-old was clearly upset following the game after Villa blew a 2-0 lead and had James Chester sent off.

Yannick Bolasie rescued a point for the hosts in the 90th minute, but Chris Maxwell saved Glenn Whelan’s penalty deep into stoppage-time to deny Villa victory in the Sky Bet Championship.

Daniel Johnson’s penalty, Paul Gallagher’s free-kick and Louis Moult’s header had put the Lillywhites 3-2 ahead with a stunning second-half comeback.

Villa fans chanted, ‘We want Brucie out’, before Bolasie’s leveller in toxic scenes at Villa Park.

A fan has thrown a cabbage at Steve Bruce tonight. #avfc pic.twitter.com/FghqUEr3ue

“To say it’s disappointing is an understatement for a club like this, (the cabbage was thrown) before we had even started,” said Bruce, after Jonathan Kodjia and Tammy Abraham had given Villa a 2-0 lead.

“The guy who is being questioned…unfortunately, it sums up the society we are in at the moment. There’s no respect for anyone.

“Certainly for someone like him, I’m surprised he knew what a cabbage was. I find the whole thing hugely disrespectful.”

Villa have won just one of their last 10 games in all competitions to sit 12th in the Sky Bet Championship.

Bruce briefly hinted he would consider his position, but remained bullish about his future.

He said: “That’s for others (to decide). You need results.

“The one thing I’ve always had is the determination to roll up my sleeves and get stuck in. I’ll always have a go.

“If I think it affects the team and the morale of the team, then of course…That’s what I’m up against at the moment. I will battle on. That’s always been my philosophy until told otherwise.”