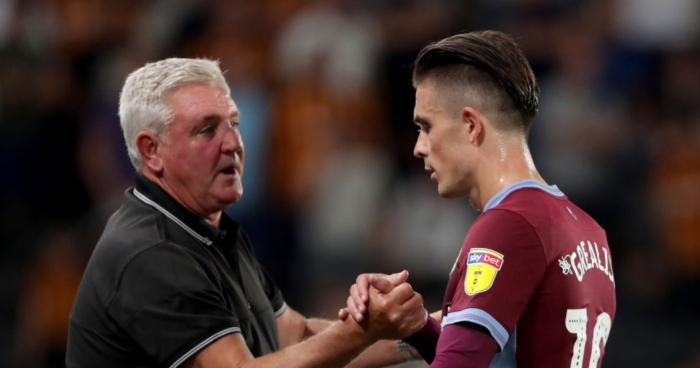 Steve Bruce knows Aston Villa have a battle on their hands to keep playmaker Jack Grealish at the club beyond Thursday’s transfer deadline.

Grealish, an integral part of Villa’s run to the Championship play-off final last season, has been linked with a move to Tottenham this summer. It should happen.

Bruce opted to start Grealish against Hull at the KCOM Stadium in their season opener and the 22-year-old provided an assist for Tommy Elphick’s goal in the 3-1 victory.

Grealish received a standing ovation when substituted seven minutes from time and the Villa fans again made their feelings known at full-time, chanting, ‘We want you to stay’.

Bruce is also keen for Grealish to remain at Villa but would understand if he is tempted by a top-four Premier League club.

“I am fed up reading about it and I cannot wait until after Thursday,” Bruce said. “Nobody wants him to leave, but there is a human element to it too.

“The owners have made it pretty clear that they don’t want to sell him and that still stands. Now if they get to a magical figure, then we will see. What that magical figure is I do not know.

“He is an Aston Villa fan, his family are Aston Villa through and through, they are probably in the away end tonight singing with the fans. It is an emotional thing for him, of course.

“But he is young and ambitious and wants to play in the Champions League and we understand that.

“We are all trying our best to hang on to him but at the moment there is no decision to be made as they are not at the figure where the owners are even blinking.”