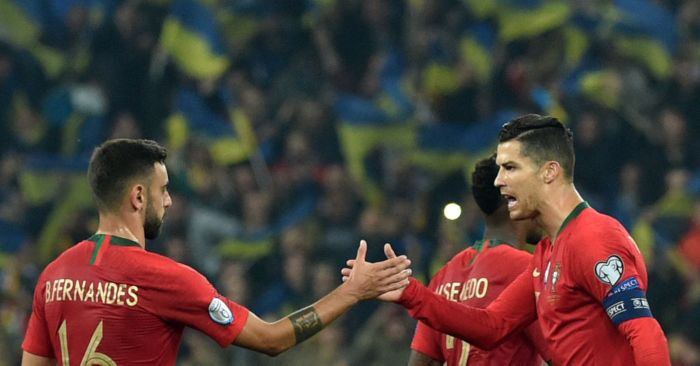 Bruno Fernandes has revealed that Cristiano Ronaldo “gave me a good reference” ahead of his move to Manchester United.

Fernandes joined United from Sporting Lisbon in January – following a path Ronaldo took in 2003 – and has immediately transformed the club.

The pair have been international teammates since Fernandes made his Portugal debut in 2017, with the 25-year-old having idolised his compatriot.

“When Cristiano burst on to the scene here in Manchester, he spent a good chunk of his early career here and enjoyed so much success.

“That’s why it was a dream of mine to play for Manchester United and I’m very pleased to be here because it’s a childhood dream come true.

“I’m an ambitious player who wants success and I want to win every game in every competition we’re in.

“I didn’t speak to [Ronaldo] before coming but did after my arrival.

“I know some people asked Cristiano what he thought of me and what I was like as a player and a person.

“I know he spoke highly of me and gave me a good reference, so I sent him a message after to thank him for his kind words.

“Pressure always has to be present in our day-to-day and we have to be under pressure to improve every day.

“I’m a person who demands a lot from myself and always want more and to do better.

“That’s why, regardless of the transfer fee, I wanted to keep improving and be a better player.”