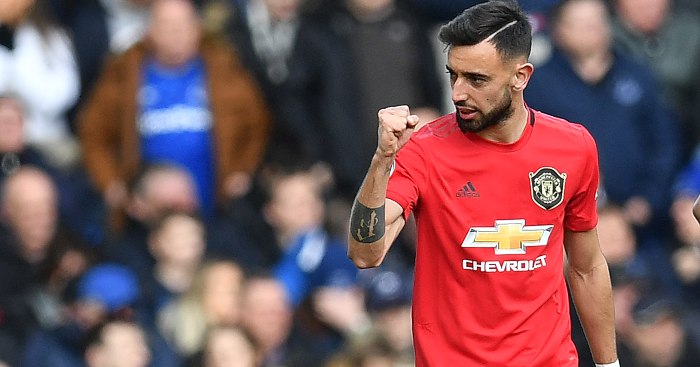 You can’t blame pleasure-starved Manchester United fans for getting turned on by Bruno Fernandes.

In his first month in Manchester, he has given the club a shot in the arm at a pivotal point in the season with flair, imagination, creativity and ruthlessness not seen at Old Trafford for far too long. Crucially, and perhaps unexpectedly, Fernandes may have provided the platform for a much brighter future beyond just the coming three months.

Almost by accident, Fernandes has become the most exciting player to arrive at United since Paul Pogba. The Portugal midfielder has been linked with all Europe’s big hitters since the end of last season – largely because it suited Sporting Lisbon – but despite the incessant speculation around him and the ridiculous numbers he was posting in the Portuguese league, most clubs remained wary of taking a punt on the 25-year-old.

By late January, United had little choice. If they were as convinced as they now claim to be, Fernandes would have been at Old Trafford in August. Had they not baulked at paying Mino Raiola his commission for driving the deal they thought was in the bag with Erling Haaland, then Fernandes might not have been pursued at all in January. But with United’s creative void growing wider by the week and their rivals’ reluctance to strengthen despite similarly obvious deficiencies, Fernandes represented an opportunity not to be missed, despite Ed Woodward’s best attempts.

The investment is reaping immediate dividends. Despite the usual concerns over a player from the continent adapting to English football, Fernandes has taken to Old Trafford like few before him in the post-Sir Alex Ferguson era. His technique and imagination were apparent immediately but United fans are also enjoying the boost he has given to the fragile mentality of the dressing room.

“With this draw, we need to be a little bit mad, because we need to do much better,” said Fernandes after United were held at Everton. “We need to win the games, because we want a place in the Champions League. So we need to try more, to improve more.”

It’s only one step up from the usual post-match platitudes after a hard-earned point but still it is music to the ears of United supporters subjected to years of ‘aspiring’ to match Manchester City, ‘staying in the game’ while only losing 2-0 to Liverpool and repeated rehashing of the lucky win at PSG after the latest nadir.

"He looks like he can be a hero of the fans."

"His awareness on the pitch is special."

Fernandes is clearly willing to grab games by the scruff of the neck and he seems to be doing something similar with his new club as a whole.

The playmaker reportedly stunned his team-mates in his first few training sessions and he has already forged bonds with a number of them on the pitch. It takes something to motivate this United dressing room, but whatever ‘it’ is, Fernandes seems to have it.

Apparently even Pogba has been aroused by his new team-mate’s introduction. The last creative midfielder to join United three-and-a-half years ago has barely bothered to hide his lack of motivation to drag United back to somewhere close to where they feel they belong, and even with Fernandes’ arrival, the suspicion remains that Pogba’s return to work from Dubai has been timed to coincide with the end of the season and his obligation to prove himself fit before the European Championships.

But Pogba’s people briefed ESPN this week, saying the £89million record signing ‘is looking forward to returning and developing a partnership with Bruno Fernandes’. Those sources also stated that ‘Pogba has closely followed United’s results during his absence’, which illustrates the ridiculousness of the situation.

‘Pogba has closely followed United’s results during his absence.'

Pogba may finally get his wish for an Old Trafford exit this summer, and he will be doing everything during the run-in and at Euro 2020 to make himself as attractive as possible to Real Madrid and Juventus. But both clubs have other concerns in the transfer market and there is a fair chance that neither will stump up the minimum amount required to tempt United into selling their most marketable asset.

Of course, Fernandes may himself become that asset, but if Pogba is made once more to stick around, the potential for a midfield partnership involving the £150million pair could be frightening if the Frenchman and his agent fathom that it is in their interests to sacrifice his personal time and needs for the club which pays his massive salary.

As Fernandes said, “we want a place in the Champions League” which will catapult United further down their road to recovery. A place at Europe’s top table and just as crucially, the appearance of competitiveness would make the club so much appealing to targets like Jadon Sancho and heighten the board’s willingness to pay for them.

If United make the most of an absolutely pivotal few months to haul themselves back into the Champions League – whether as part of the top four or five – Fernandes would likely be due most of the credit. Should he maintain his form and influence on those around him, by the summer he will be looked upon as the best signing since Robin van Persie. It’s a low bar but he could vault over.