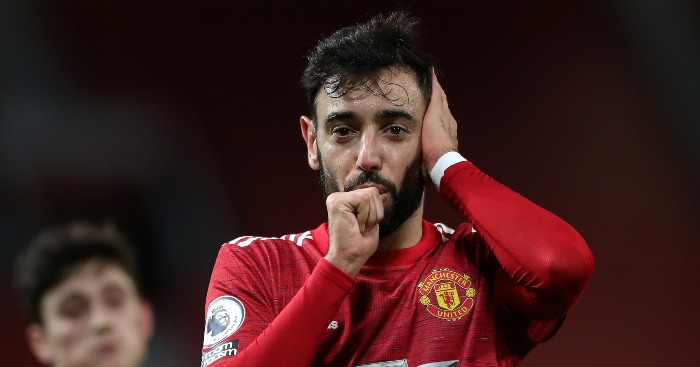 In 2016, it was N’Golo Kante on the way to his second successive Premier League title.

In 2017, it was Kevin De Bruyne on course for a dominant Premier League title win.

In 2018, it was Virgil van Dijk in the midst of an epic Premier League title race that eventually ended in narrow disappointment.

In 2019, it was Sadio Mane midway through a Premier League title cruise.

In 2020, we choose Bruno Fernandes as the man driving the unlikeliest of Premier League title challenges.

But why do that when you can choose the man who sits second on both lists, turning the fifth-best team of 2019 into the second-best team of 2020 since his arrival after a particularly miserable January. There are the astonishing measurables (17 goals and 12 assists in 27 Premier League appearances) but Fernandes excels greatest in the immeasurables of ambition, pride and the pursuit of excellence. A rabble has become a riot of forward motion. The team that scored 1.47 goals per game in 2019 has scored two goals per game in 2020, and the difference is almost entirely Fernandes.

United can and probably will still fall short, too often following two or three excellent performances with the lackadaisical. There are issues with pace at the back, balance in midfield and the absence of a tactical plan that goes beyond the counter-attack, but almost everything good goes through Fernandes. He is not precise like De Bruyne nor explosive like Salah but he is exactly what United needed: Driven, inspired, inspirational. He leads, he pushes, he takes risks.

Remember those reports from August 2019 when it was claimed that ‘United were quickly dissuaded from pursuing Bruno Fernandes after it emerged the Portugal international gives the ball away too often. United had run the rule over the Sporting Lisbon midfielder but Sportsmail understands that scouts felt his way of playing did not suit Ole Gunnar Solskjaer’s style’? They even cited a pass completion of 75.1% as being too low for this great United side. His pass completion rate this season? 76.1%. We suspect it could drop below 70% and nobody at Old Trafford would now care; Solskjaer’s style has simply become ‘give the ball to Fernandes’.

Not since Van Dijk spent a year transforming Liverpool from the sixth-best team of 2017 to the second-best of 2018 has one player had such an extraordinary impact. He has been the catalyst in a failing experiment, and Solskjaer knows it: “He has not changed the team, but he has sparked the team.”

He has also undoubtedly saved the Norwegian’s job. After marking his one-year anniversary in sixth, Solskjaer celebrated his two-year anniversary in third; that he would not have reached that milestone without Fernandes does not even feel like a controversial statement.

But while Liverpool improved through Van Dijk in January 2018 and then pushed again that summer with the signings of Alisson, Naby Keita and Fabinho to accelerate through the gears into a title challenge, Manchester United made only peripheral changes the summer after Fernandes’ arrival, which will likely keep them among the chasers rather than the chased.

But the reason why we are talking about chasers rather than fallers is Fernandes: The man of 2020.