Home Mediawatch How are Fernandes and Rashford feeling? Let’s pretend… 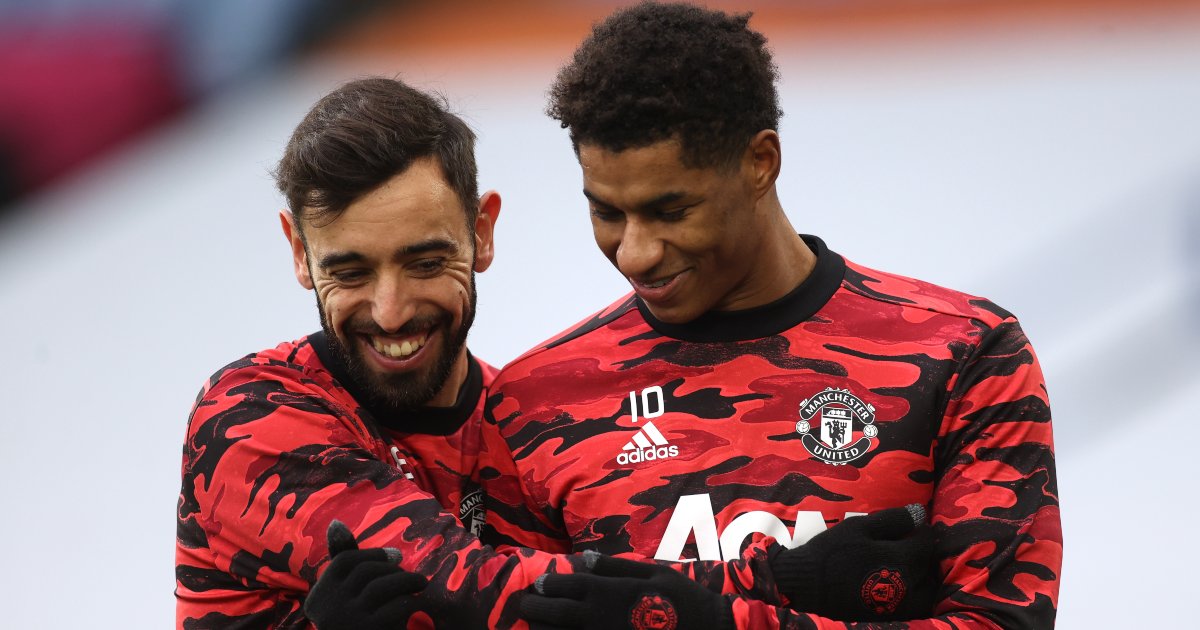 Bruno Fernandes and Marcus Rashford have their minds read. But first…

Row, row, row your boat
A ‘row’ is ‘a noisy acrimonious quarrel’ and by its very nature requires at least two participants, both of which should be angry.

So quite how Jurgen Klopp saying that he will not allow his players to go on international duty if they have to quarantine for ten days on their return – as FIFA allows – is a ‘CLUB v COUNTRY: HUGE COVID ROW’ is a question to which only The Sun know the answer.

Obviously the answer is that ‘a row sells rather more papers than some quotes from a football manager in which he states the rights of his football club to ignore an absolutely bat-sh*t international break’ but the truth is that it is bollocks.

Indeed, even The Sun website originally reported the story as ‘LIVERPOOL manager Jurgen Klopp has revealed some of his players will not be allowed to go on international duty if they need to quarantine upon their return’.

By the time it hits the back page of a newspaper not bought by Liverpool fans – and crucially after an arse-numbingly terrible Manchester United performance – the ‘reveal’ has become a ‘threat’ and it’s now a ‘HUGE COVID ROW’.

Oh and illustrating your back page with an image of Sadio Mane is particularly questionable as the forward will play in Senegal and Congo, neither of which are currently on the government red list. But, well, it’s all Africa right?

…gently down the stream
Painting this as a ‘club v country row’ (MailOnline headline: ‘We can’t let them go if they have to quarantine in a hotel… we pay, so we’re first priority’: Jurgen Klopp reveals Liverpool will REFUSE to let his stars play for red-list nations in a new club v country row) is an absolute nonsense.

This is not Sir Alex Ferguson claiming Ryan Giggs has a hamstring injury and then blithely playing him three days later; this is a club manager saying that he does not want to lose his players to a ten-day quarantine after they have jetted off for a set of international fixtures that absolutely should not be happening in the first place. And it’s a stance FIFA have backed.

Oh and it’s not even a sodding row until somebody a) shows acrimony and b) quarrels.

Erm, yeah, don’t think it will be a problem for David Luiz. pic.twitter.com/0eoVkcKkDX

Tuchy
Elsewhere on the actual Sun back page, we are told that ‘THOMAS TUCHEL does not care if he wrecks the Euro dreams of Chelsea stars’. The heartless b***ard. The Mirror website describes this as a ‘ruthless warning’, as if the normal thing to do would be to pick all of the fringe Euro 2020 players in every Chelsea team just to do them a favour.

Oh and we think that Tammy Abraham might have wrecked his own Euro dreams by not scoring a single Premier League goal in 2021.

Suggestible
Manchester United did play on Wednesday night and if you are thinking that the only interesting development was the effing and jeffing between Harry Maguire and Marcus Rashford then you are wrong, because…

Wow. Now this is big news. Or at least it would be if, well, Bruno Fernandes had ‘suggested’ anything at all. Or at least, you know, spoken.

Because of course all the ‘suggesting’ was done by his performance. FFS.

Or, as the Mirror put it, ‘Fernandes’ recent struggles suggest more rotation may be needed despite their reliance on his creativity’.

Odd how that did not make it into a headline that does rather more than suggest that Fernandes has spoken.

Frustration
Also happy to give us all the impression that Bruno Fernandes has spoken are talkSPORT, who are also keen to let us know that they have an ‘exclusive’. It’s quite the coup.

Okay. So this must have come from Fernandes himself, or somebody close to him. Let’s read on….

‘Bruno Fernandes is getting ‘frustrated’ at Manchester United because he is a ‘level above’ all the players around him, talkSPORT has been told.’

Ah, it’s a ‘source’. Let’s keep going, through five paragraphs of statistics and facts about the poor form of both player and club until we reach…

‘And former Premier League striker Dean Ashton has explained why the Portugal playmaker has cut a frustrated figure on the pitch in recent weeks.’

On the plus side, it is a genuine exclusive; nobody else has pretended that former West Ham and Norwich striker Dean Ashton knows what’s going through the mind of Bruno Fernandes.

Tell us how you feel…
And it’s not just Bruno Fernandes; the Mirror want you to believe that they know the inner workings of Marcus Rashford’s mind:

There is no need to do the dance; now all we need to know is exactly which utterly unrelated person has said that Rashford looks ‘fed up’.

Award yourself an ice cream if you said ‘Pat Nevin’.

And add a Flake if you correctly guess that Pat Nevin said absolutely nothing about the ‘X-rated row’ but that the Mirror crowbarred that into the headline just for the clicks.

Shameless click-bait of the day
‘Erling Haaland joke made as it’s claimed Leeds United ahead of Chelsea in queue for striker’ – Leeds Live.