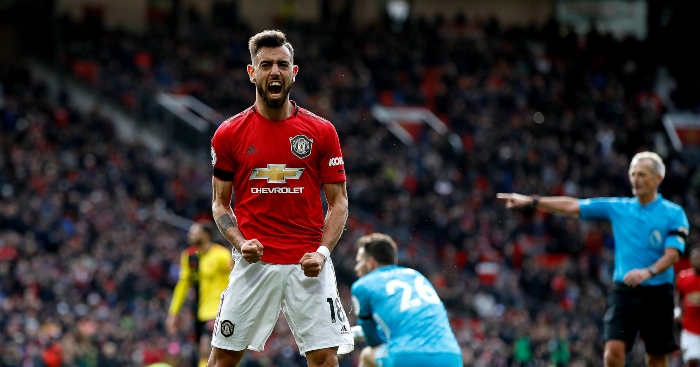 Manchester United midfielder Bruno Fernandes claims there is “something creepy” about the tunnel at Old Trafford.

The Portuguese playmaker has had an instant impact after his £47million move in January, with United’s form and style of play altered completely since his arrival.

And Fernandes has revealed some of the subtle differences to playing in Portugal compared to England.

“English football is different from all the others,” Fernandes told Canal 11.

“In Portugal, if Sporting play against a smaller team, most of them close their defence.

“Here, the teams come to Old Trafford and it is different: they want to press, attack and take risks. The intensity of the game is very high.

“In England you live football in the pure state.

“There are whistles, applause and songs. We go into the stadium to warm up and it’s empty. We come back from warm-up, it’s half full, and when we come back to play, it’s full.

“The tunnel cancels the noise and as soon as we leave the tunnel there is a noise, something creepy. The Theatre of Dreams is something incredible.”

On the talk he had with Cristiano Ronaldo before joining United, Fernandes added: “The first time I went to the national team it was he who came to me.

“‘So, are you doing well at Sporting? You have scored a few goals’.

“Just the fact that Cristiano is coming up to me and saying he is running well […] the fact of showing that he was attentive to the work that I was doing… you think: ‘How is it possible for such a player to be attentive.’

“Of course, he was at Sporting, the club that formed him and for which he has great affection.

“Cristiano Ronaldo and Nani won big trophies at United and that makes me want to have those trophies.

“Nani, with whom I had the opportunity to train at Sporting, has always told me good things about Manchester United.”