Bruno Fernandes to miss FOUR matches. Except he probably won't because it's nonsense. 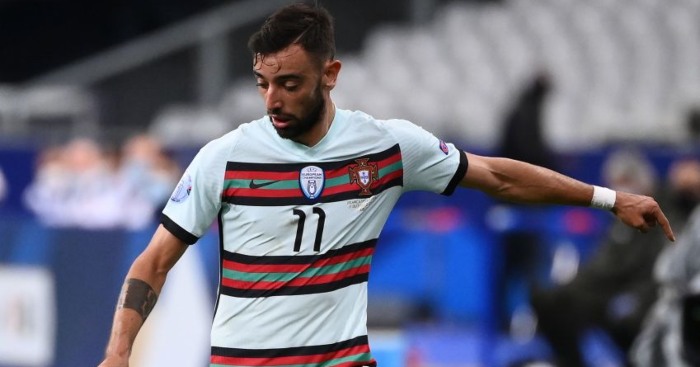 Whenever we want to know the latest coronavirus rules in the UK, the first place we look are the sports pages of a Portuguese newspaper.

Or at least it would be if we wanted to garner delicious clicks about Bruno Fernandes possibly missing two weeks of football for Manchester United.

According to A Bola:

‘In light of the protocol carried out by the English Government, 10 Portuguese internationals may have to comply with mandatory quarantine after contact with Cristiano Ronaldo, infected with Covid-19, at the National Team stage.

‘This is the same rule that will prevent Edinson Cavani from making his debut for Manchester United as early as Saturday, as the Uruguayan striker has not yet completed 14 days of isolation after arriving from Paris to sign for the Red Devils.’

And it’s at this point that we start suspecting that A Bola might not be the font of all knowledge when it comes to UK quarantine laws as Cavani is actually in isolation because he was living in the general French population and not in an elite sportsperson bubble. It’s an entirely different situation.

But why let that get in the way of hysteria?

‘Man Utd could be without Bruno Fernandes for FOUR matches under UK rules after Ronaldo’s positive coronavirus test’ – The Sun.

Presumably nobody stopped to wonder why the entire Liverpool squad was not in self-isolation after several positive tests.

The latter story in The Sun is particularly excellent because they clearly think this is an utter nonsense but are happy to claim the clicks anyway.

‘Regulations in the UK state anyone who has been in contact with a confirmed case must self-isolate for two weeks.

‘However, United and Fernandes could be exempt from this because the rule does not apply to footballers who have been in athlete bubbles.

‘United will already be without new signing Edinson Cavani when they travel to Newcastle on Saturday as he is still in quarantine following his move to England.

‘But Fernandes’s situation is different to Cavani’s because the striker was not in a secure bubble before his move.

‘Fernandes could, in theory, even start in Portugal’s Nations League clash against Sweden tonight.’

But still, they ‘could’ be without Fernandes for FOUR matches (if we choose to believe that A Bola have the inside track on UK coronavirus laws, which we do not).

The English football media has an unquenchable obsession with Mesut Ozil and money.

The latest example comes on The Sun website, who dare to stamp a REVEALED tag on this (non) story:

‘It has been claimed the former Schalke supremo is due bonuses for every appearance he makes due to a clause in the contract he agreed in January 2018.’

Well done The Sun, for REVEALING absolutely nothing of any consequence after reading a throw-away line in The Athletic three whole days ago.

Get this Partey started

Over at the Metro, ‘Thomas Partey drops Arsenal debut hint ahead of Manchester City clash’.

Get him in your fantasy team, pronto.

At what point can you say that a manager is set to ‘ring the changes’?

Mediawatch has no definitive answer but we are pretty sure that four changes – two of which are forced – does not qualify.

‘GARETH SOUTHGATE is set to ring the changes for England’s clash against Denmark tonight’ – The Sun website.

How is that predicted England line-up sold, in this the slowest of all football news weeks?

Note the quote marks. And who are they quoting?

‘Kane’s Spurs team-mate played all 90 minutes of England’s 2-1 win over Belgium. But news of his apparent injury will infuriate Jose Mourinho, who does not want to see any weakening of his squad amid Tottenham’s chaotic fixture list.’

Just quoting themselves. For f***’s sake.

You can hardly blame The Sun website though; this ridiculous attempt to feed a ‘feud’ between Jose Mourinho and Gareth Southgate actually makes the back page of the Daily Mail, who pull out an exclamation mark for a ‘Not again, Jose!’ headline.

‘ERIC DIER is an injury doubt for England’s clash with Denmark tonight – news that is sure to irritate Tottenham manager Jose Mourinho.’

We are pretty sure that after 20 years of management, he knows that players get injured.

As for the ‘not again, Jose!’, it’s almost like Gareth Southgate’s insistence that Harry Kane was not actually injured has fallen on deaf ears because the narrative of Mourinho’s ‘irritation’ is too tempting.

‘The injury will sound alarm bells at Tottenham, after Harry Kane was introduced as a second-half substitute during the win over Belgium despite apparently being short of fitness.

‘Southgate moved to quell suggestions of tensions with Spurs over England’s handling of Kane, insisting his captain was merely complaining of muscle fatigue. Southgate is set to start his talismanic striker against the Danes tonight.

‘But Dier’s muscular complaint will add to Spurs’ and Mourinho’s frustration, particularly after the Portuguese pleaded with Southgate to be careful with his players ahead of the international triple-header.’

And Southgate has really screwed him over by playing Kane for 24 minutes across two games, Eric Dier for a full 90 minutes and Harry Winks for 75 minutes. Irritated? Mourinho should be incensed.

Adam Bate on England’s back three