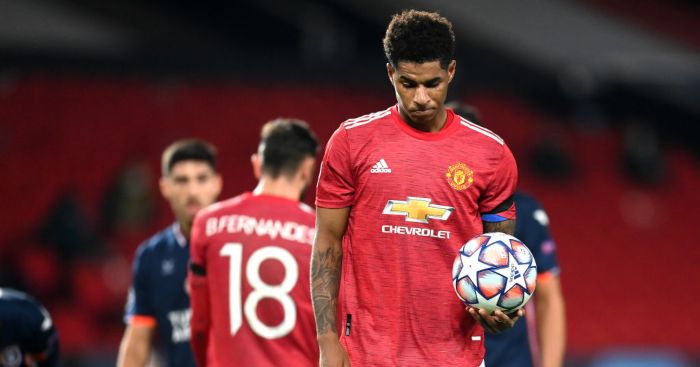 Man Utd midfielder Bruno Fernandes has revealed his reasoning behind giving Marcus Rashford the opportunity to take a penalty in their 4-1 victory over Istanbul Basaksehir.

Having opened Group H with stunning victories against Paris Saint-Germain and RB Leipzig, defeat to the Turkish champions at the start of November threatened to derail the Red Devils’ Group H campaign.

But Man Utd got back on track at an empty Old Trafford on Tuesday evening, with Fernandes’ brace added to by Rashford’s penalty and a late goal from substitute Daniel James.

MAILBOX: Van de Beek is being compared to Scholes already…

Fernandes is United’s regular penalty taker but he allowed Rashford to take the spot-kick on Tuesday evening.

When asked if he was feeling charitable in giving Rashford the penalty, Fernandes told BT Sport: “No, that’s not the point.

“Of course, everyone wants to score a hat-trick but after the game in the Premier League [against West Brom] I told Rashy the next one he will take. I remembered that and also because he is one of the top scorers in the Champions League.

“I think it will be important for him to keep going there and taking that confidence. As I say, it doesn’t matter who takes the penalties. The most important thing is scoring and the team scores. When the team scored I score too.”

On Fernandes’ decision, Solskjaer said: “Marcus is a very good penalty taker as well, Bruno is very confident, if Bruno feels he wants to give it to Marcus, so be it.”