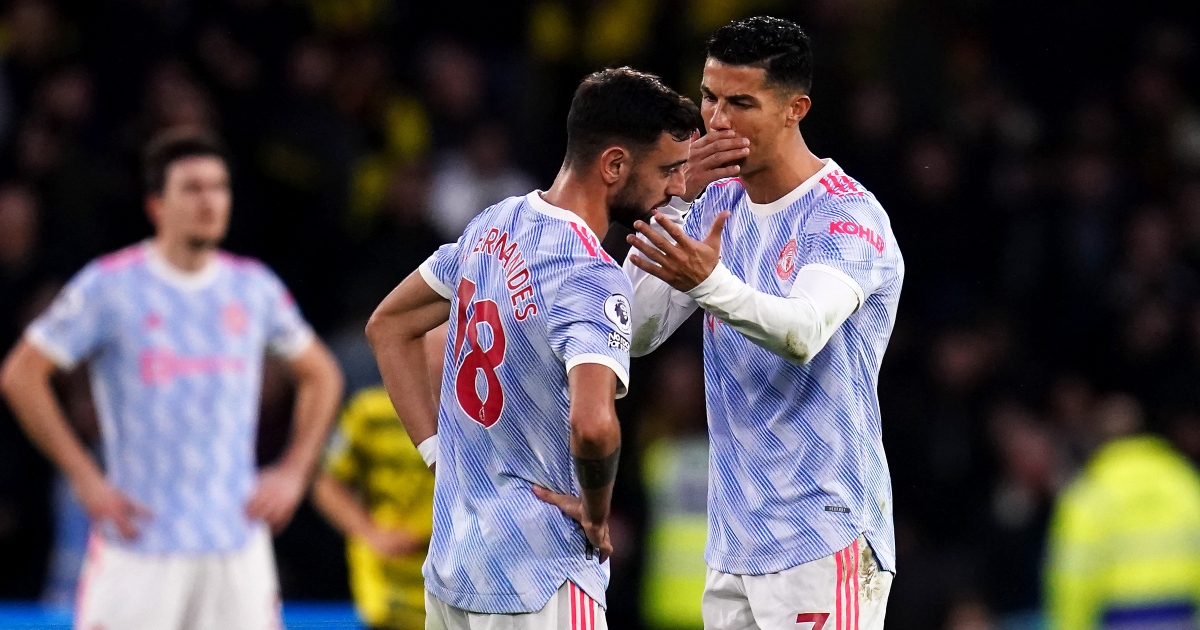 Andy Cole believes Bruno Fernandes is not the “same player” he was before Cristiano Ronaldo joined Manchester United last summer.

Bruno has scored five and assisted nine in 24 appearances this season. The attacking midfielder managed 40 goals and 25 assists in his 80 matches prior to this term.

He has undoubtedly slowed down since the arrival of Ronaldo in August last year, and club legend Cole has discussed the 27-year-old’s dip in form.

“It’s been funny at the moment. Ronaldo’s come back and it’s like [Bruno’s] whole game has changed,” the former striker told Premier League Productions.

Bruno Fernandes hits the woodwork and moments after he finds Cristiano Ronaldo with a free kick who puts the ball in the back of the net but it's offside!

Man Utd’s interim boss Ralf Rangnick could be facing his first crisis as manager after the Mirror reported on Tuesday that ‘as many as 11 players’ want to leave the club.

The Red Devils suffered their first defeat under the German on Monday, losing 1-0 at home to Wolves.

The report says ‘as many as 11 players want to leave the club after becoming disillusioned with life at United’ and that ‘an increasing number of players marginalised under Solskjaer are suffering the same treatment under Rangnick’.

Furthermore, ‘many of the players are underwhelmed by Rangnick’s coaching, not impressed by his tactics and disappointed by the quality of his assistants’. The German’s job as manager being on a temporary basis has also weakened his position.

The ‘resentment’ of these players is ‘threatening the unity and harmony of the dressing room’, the report adds.