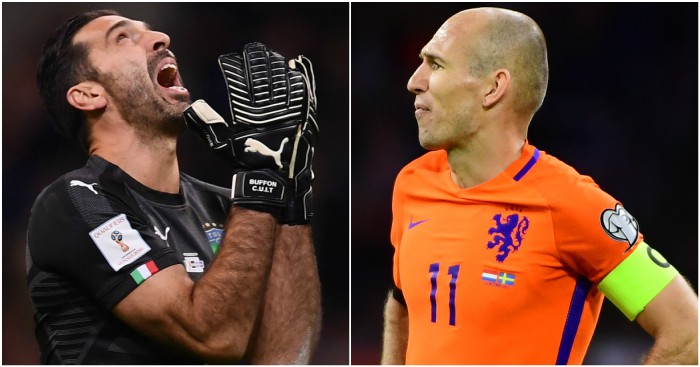 Some have retired from international football, others we’ve written off. Either way, there’s a fair chance we won’t see these 10 legends or Jean Beausejour at a World Cup ever again.

GK: Gianluigi Buffon
It wasn’t supposed to end like this for the Azzurri legend. His 175th and final Italy cap ended in tears in the knowledge that his career will conclude in May rather than June or July without going to a sixth World Cup.

The Juventus keeper will just have to go out in a blaze of glory by winning the Champions League instead. That’s unlikely too.

RB: Antonio Valencia
Valencia will be 37 by the time Qatar 2022 rolls around and that’s asking a lot even of the the Manchester United machine, who so far has amassed 92 Ecuador caps.

It would mean extending his international career into an 18th season and, given the strain involved, it seems likely that Valencia will have chosen to focus on his club duties long before then.

CB: Giorgio Chiellini
Aside from Buffon, the Juventus centre-half was one of three additional Italy retirees after their play-off anguish against Sweden, which the 33-year-old described as ‘zero hour’ for the national team.

Their elimination leaves Chiellini four caps short of his century and denies him the opportunity to move ahead of Gianluca Zambrotta into seventh, one place behind Dino Zoff in the all-time list of Italy appearance makers after a 13-year international career.

CB: Andrea Barzagli
“In football terms, it’s the biggest disappointment of my life,” said the usually unassuming Juventus centre-back after stepping away from the national team immediately after they had been put on their arse by Sweden.

Unlike Chiellini, Barzagli can at least console himself with a World Cup winner’s medal from 2006 in addition to his truckload of domestic honours.

DM: Michael Bradley
The USA find themselves at the start of an English-style root and branch review following their failure to reach Russia, and acting coach Dave Sarachan suggested that youth will be given its chance.

That said, despite holding 140 caps already and looking closer to 40, Bradley is only 30 right now. Whether he’ll still be useful to whoever is in charge when he turns 35 remains to be seen, but it is hard to imagine that the United States won’t have fresher legs coming through in the next five years.

Of course, De Rossi went out all guns blazing. Sadly though, they were aimed in the direction of a member of Gian piero Ventura’s coaching staff, who was told in no uncertain terms by Rossi to ready striker Lorenzo Insigne rather than him.

RW: Arjen Robben
“The Man of Glass lasted the longest,” said Robben after cutting inside for the last time in the final qualifier against Sweden last month, drawing to a close a 15-year international career during which he won 96 caps. Just think how many more it would have been had he not been so delicate.

AM: Wesley Sneijder
The 33-year-old was dropped for the final qualifying double-header last month so after 132 caps we can presume that the career of Holland’s all-time record holder for appearances is over.

He will presumably use his spare time to finally wrap up that move to Manchester United that has been in the works for six years.

LW: Alexis Sanchez
“He is 29 at the end of the year, so the next one he will be 33,” said Arsene Wenger after Sanchez returned to Arsenal with a ‘very difficult mind’ in the wake of their qualification elimination last month. The World Cup final in Qatar is scheduled for the day before Sanchez turns 35.

It is not inconceivable that he would still be on the international scene in five years but, as Wenger also speculated, players who have to carry the ‘expectation of a nation’ almost single-handedly eventually grow weary. Not that it will be Wenger’s problem by then, or even a year from now.

CF: Edin Dzeko
Speaking of players who carry the weight of a nation, Dzeko will be more reluctant than most to prematurely walk away from the international scene, given the immense pride the he takes from representing Bosnia.

But the centre forward will be 36 by the time Qatar 2022 arrives. He has eyes on overtaking Emir Spahic’s caps record – Dzeko is four behind the 37-year-old, but that is surely the ceiling on his ambitions. If Matt Stead has his way, Dzeko might be back in the Premier League…