Home All The News Buffon ‘sorry’ for offending Michael Oliver 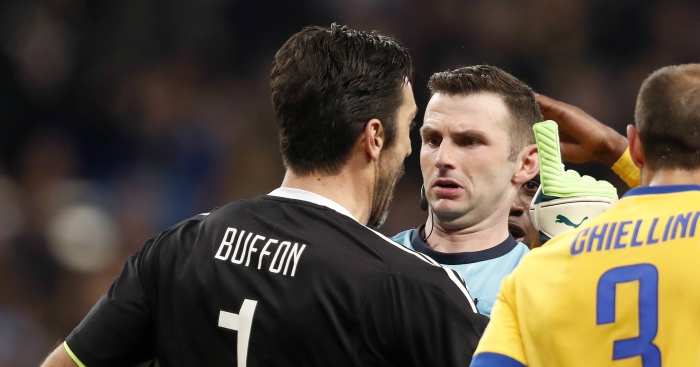 Juventus goalkeeper Gianluigi Buffon has apologised for offending English referee Michael Oliver with his behaviour during and after a dramatic Champions League clash at Real Madrid.

The 40-year-old Italian, who on Thursday announced he will play his final game for Juve this weekend, launched a verbal attack against Northumberland official Oliver after April’s match at the Bernabeu.

Juve had overcome a three-goal deficit in the quarter-final to reach the brink of extra-time in Madrid, but Oliver awarded a late penalty for a Medhi Benatia foul. Buffon was then sent off for angrily confronting the referee and Cristiano Ronaldo converted the spot-kick to send Real into the next round.

Buffon is the subject of a UEFA misconduct charge for publicly criticising Oliver following the tie, notably saying he had a “rubbish bin for a heart”, and this week he accepted he had been offensive.

“It is obvious that I have transgressed and I am sorry,” he said at a press conference called to confirm the end of his playing career at Juve and broadcast on the club’s official website.

“But it was a very special situation. I couldn’t do anything else but say those things and I am sorry to have offended the referee.”

Oliver and his wife Lucy were offered police support in the wake of the incident, after both were targeted by social media trolls. UEFA will deal with Buffon’s case on May 31.