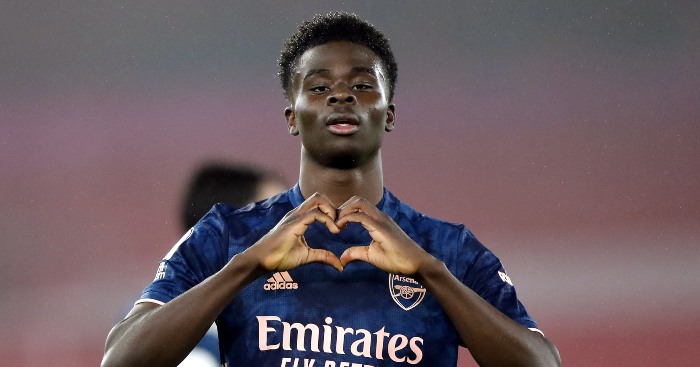 Arsenal’s last Premier League defeat – about 14 years ago on December 19 – featured Saka at left wing-back, Ainsley Maitland-Niles on the other flank and Willian and Nicolas Pepe either side of striker Eddie Nketiah. This latest victory over Southampton retained just five players from that Everton loss and just one (the goalkeeper) played in exactly the same position. The 3-4-3 formation has been abandoned, Emile Smith Rowe introduced and Saka shifted onto the oft-troublesome right wing. Saka has scored four goals and created two more since that change. He has been extraordinary.

Against Southampton, he was involved in all three Arsenal goals, playing the first pass that led to 1-1, scoring the second with assists from both Alexandre Lacazette and Saints keeper Alex McCarthy and then delivering a wrong-footed pass for Lacazette to make it 3-1. The man picked at left-wing-back for England in November is the Premier League’s in-form right-winger in January.

A brilliant ball through from Lacazette and the teenager takes care of the rest! pic.twitter.com/fpo7QxBNO7

Arsenal are unbeaten in six Premier League games – that flat 0-0 draw with Crystal Palace marks their only dropped points in that spell -since Mikel Arteta accepted that his most creative and dynamic players were 19 and 20. Saka had to be moved into a position from which he could both damage and restrict the opposition while Smith Rowe emerged from the bench to enliven an area of the pitch that had become flat and predictable. And those around them have caught a dose of their infectious effort; Lacazette is enjoying one of his better spells as an Arsenal player and even Nicolas Pepe had a spark against the Saints. Hell, even Willian was not terrible when Smith Rowe was forced off.

But as refreshing as Smith Rowe has been in recent weeks, it is Saka whose ceiling is the highest. When Jack Wilshere named him as the Gunners’ best player this week, it was not even vaguely controversial. He is 19. He has pace, trickery, intelligence, instinctive finishing ability and a refreshing work ethic. “The boss makes everything clear for me but at the same time gives me the freedom to do what I want in the final third,” said Saka on Tuesday night. The boss should drop to his knees and be thankful for Saka every single day of his life; every manager must dream of such a player emerging from the academy.

This is an Arsenal team finally looking up the table again, with champions Liverpool now just four points away. But even if they crane their necks, they will not catch sight of the potential of the boy now flying down the right.