Home Arsenal Injury boost for Arsenal ahead of Wolves clash 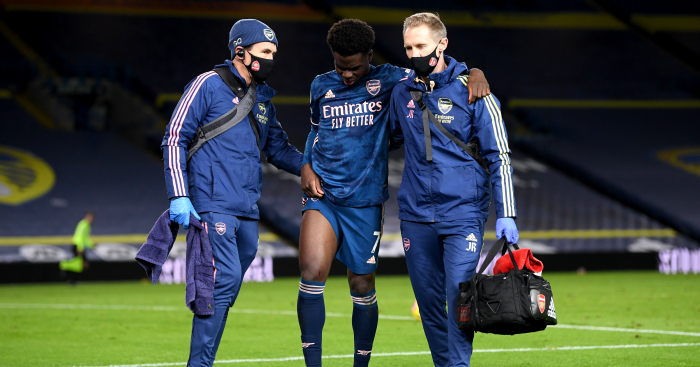 Arsenal have received an injury boost in the run up to their clash against Wolves on Sunday, after it has been confirmed that Bukayo Saka only suffered a dead leg in last Sunday’s 0-0 draw with Leeds United.

Fans and staff alike were concerned after the England international was unable to complete the match. Coming off the bench, Saka suffered a clash late on with fellow England star Kalvin Phillips.

The teenager limped off then, and there was concern that he could have suffered ligament damage that could leave him on the sidelines for an extended period.

Mailbox: Why we should marvel at Salah more than De Bruyne…

These fears were heightened after the winger did not travel to Molde for the Gunners’ Europa League match in Molde.

The club have confirmed, however, that young Saka has avoided major injury, and instead only suffered a dead leg, and should be available for Sunday’s match, reports The Standard.

This is a boost for Arteta.

The Spaniard has come under fire for his side’s lack of creativity in the final third this season, and the winger has been one of his most promising players.

Sunday’s clash with Wolves already feels like a must win game for the Gunners. Arsenal sit in 12th after nine games, five points off Leicester City in fourth.

He and Saka will join Mohamed Elneny and Sead Kolasinac on the sidelines, who are also missing out on the trip to Molde as they recover after testing positive for coronavirus.