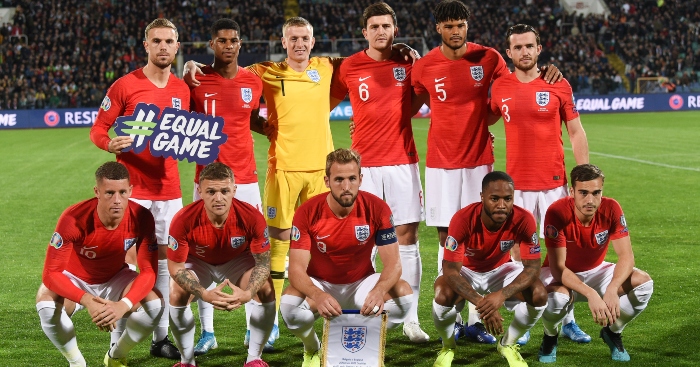 JORDAN PICKFORD
Even in a first half during which England battered the opposition, their No.1 still managed to showcase all that is good and bad about his game. One superb save low down to his right from Popov’s 13th-minute drive, a parry made all the more difficult by a hefty nick off Mings, was a timely reminder why he remains Gareth Southgate’s custodian of choice. Then came a hopeless lapse in concentration, aiming a 30-yard pass 30 yards from Ben Chilwell’s feet, to emphasise the kinks Pickford is yet to iron out. But his very first involvement was encouraging in that respect- he got a back pass caught under his feet but when the pressure arrived, rather than Cruyff turn his way out of trouble, Pickford simply smashed it. That, as daft as it may sound, was a reassuring sight and these have been a reassuring couple of outings for a keeper who always looks busy even when he’s not.

KIERAN TRIPPIER
The right-back is a rejuvenated figure since his move to Atletico Madrid and Trippier appears at ease with himself once more. He spent much of the first half in particular acting as peacemaker – on and off the pitch – displaying a coolness that was so woefully absent last season. In Prague, Trippier carried much of the attacking burden from the back but here he was more willing to share the load with Chilwell, bursting forward more sparingly and making sure the back door was secured after it was left swinging in the wind last Friday.

TYRONE MINGS
Southgate said this was ‘a night for leadership and experience’, which speaks volumes of the impression Mings must have made over the last week or so. The Aston Villa centre-back had never played an international of any sort prior to landing in Sofia but Southgate has identified something in Mings which suggests the shirt is his to lose. He was rarely tested by Bulgaria’s attack but he slotted into the back four and looked far more at home than many of Maguire’s previous partners. Mings gave Chilwell plenty of protection to allow the full-back to bomb forward and when he had the opportunity, the centre-back was happy to drive into the midfield, just as Southgate demands of his defenders. A first-class debut in an environment in which many more experienced internationals might have struggled.

HARRY MAGUIRE
A comfortable night in every respect for Maguire, especially in the presence of a defensive partner who didn’t appear drunk. As it was for many of the England players, this was a ‘back-to-basics’ game for the £80million defender, who needed only focus on his core duties, i.e. head it and pass it. He managed both, even if he was a little too reliant on the big switch from right to left in the first half.

HARRY WINKS
Replaced Declan Rice in the XI because, in Southgate’s words: “He’s as good a midfielder as we’ve got at connecting back to front.” Winks had most touches, made 125 passes – 24 more than any team-mate – but most encouragingly, more passes in the opposition half than anyone else. This, of course, was an ideal night for Winks to demonstrate those talents, against a wretched side with no plan or intention to press him. Can he operate to a similar standard against foes in his face? We’ll have to wait and see, but if Southgate is to stick with a 4-3-3, Winks certainly seems to have gained an edge on his rivals for the shirt.

JORDAN HENDERSON
Carried on where England left off from Friday by getting himself booked by tripping over his own feet going in for a tackle to retrieve his own heavy touch. But Henderson cooled his jets in a revamped midfield which left him only the simple jobs of tidying up and feeding the likes of Barkley and Kane while Rashford and Sterling flew forward.

ROSS BARKLEY
The Chelsea midfielder won’t have heard Roy Keane’s pre-match evisceration but his first-half performance was the perfect response. One of Keane’s gripes with Barkley is that no one yet knows his best position, but Southgate seems to have a better idea than most. From the left of the midfield three, backing up Rashford in his more natural habitat, Barkley combined with the United forward and Chilwell effortlessly. Another Keane criticism: does he have the creativity and nous to act as playmaker? An assist and two goals, both first-time finishes  from perfectly timed arrivals in the box, suggests so. But we already knew that. We just need to see it more often.

RAHEEM STERLING
If Sterling showed flashes of some of his old traits last Friday, tonight he was back to doing what he does best: sticking it to racists with devastating penetration through Bulgaria lines and dead-eyed composure in the box. The Manchester City star converted two of his five attempts, wreaking havoc with Rashford while Kane performed the unfamiliar role of assister-in-chief. Sterling, and just about everyone else, looks far more at ease in this formation.

HARRY KANE
England’s centre-forward would love to have been on the receiving end of some of the service he was dishing out for Sterling and Rashford. Kane laid on three of the visitors’ five goals, playing a hefty role in another, while creating more chances than any team-mate. It was an exemplary No.10 performance from England’s No.9, who turned his nose up at two chances he would normally gobble up before getting his goal with a run and a nutmeg outside the box before stroking inside the near post.

MARCUS RASHFORD
His first touch, mis-controlling a long pass straight out of play, summed up his recent form but his second involvement belied the woeful lack of confidence he has shown this season. What a f*cking goal! Rashford skinned two Bulgarians, leaving the right-back on his backside, before taking on the shot from an acute angle when England had three runners bursting into the six-yard box. The left of a front three must now be seen as Rashford’s best position but it would take a major rethink on Ole Gunnar Solskjaer’s part to see the Manchester United striker in this role with this amount of freedom to find space high up the pitch. Back to the grind on Sunday.

MASON MOUNT (for Barkley, 72)
Glared at by Kane after wasting a chance his industry had created when he robbed the Bulgaria keeper. Reverting to 4-3-3 does his prospects of a regular start little good.

JADON SANCHO (for Sterling, 72)
Failed to display his usual ruthlessness with his only chance in added time. Almost certainly, like Rashford, Sancho would have been more comfortable in this shape rather than the one in which he started on Friday.

CALLUM WILSON (for Rashford, 76)
Almost crowned a busy cameo with with another international goal but with the last kick of the game, his effort from close range hit the foot of the post. Hey ho.