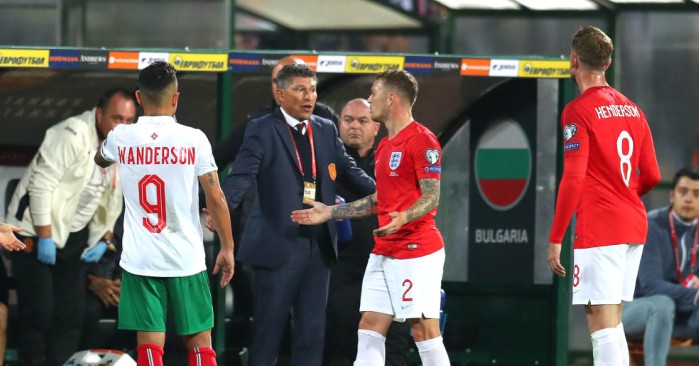 But the 6-0 victory was overshadowed by deplorable racist behaviour, which forced the Group A match to be halted twice in the first half.

Asked about the racism at a ground already partly closed due to a previous UEFA sanction for “racist behaviour”, manager Balakov said: “I was concentrated on the game.

“I didn’t actually hear anything but I just talked to the English press downstairs and I told them that if this is proven to be true, then we have to be ashamed and we have to apologise for it.

“But, once again, first it has to be proven to be true.”

The word “if” was repeatedly used by the Bulgaria head coach, who on the eve of the game said England had a bigger problem with racism than his country did.

Mmmmh … Not sure about this one chief https://t.co/Jyjr6vFtA8

“Let me tell you that even though you all know Bulgaria has had disciplinary measures against our union, those have not been because of racist chanting or ethnic hatred,” he said.

“Those were referring to the fact that the stadium was partly closed because of the display of a banner for an organisation which is not forbidden by Bulgarian law and for a small third-party group of people who were chanting in the game against Kosovo.

“Either way, this all happened, this became a topic after we played at Wembley and it absolutely replaced football as the main topic, which I don’t think is fair.

“But, of course, I think this is an extremely serious and sensitive topic.

“I have always had my firm stance against racism and if something is proven to be true, and there was this actual abuse, then again we have to say that this is a big shame.”

One person who appeared come out with credit was Bulgaria captain Ivelin Popov, with Rashford thanking him on Twitter for showing “courage” in speaking to fans at half-time.

But Balakov believes that conversation was more likely to be about Bulgaria’s poor display than a plea to halt racist abuse.

“I have to say I really have no idea about this,” he added.

“If our captain spoke to the fans, then it’s probably because the fans were unhappy with the way the team was performing.

“The whole topic in the build-up up to the game, the fans are emotional, but – you obviously, because you want me to say this and I have to say this – if something happened then I’m sure it was a small group of people who were really out of their minds because this is unacceptable.”