Home Mediawatch Bulgaria manager was ‘spot on’ about racism? Really? 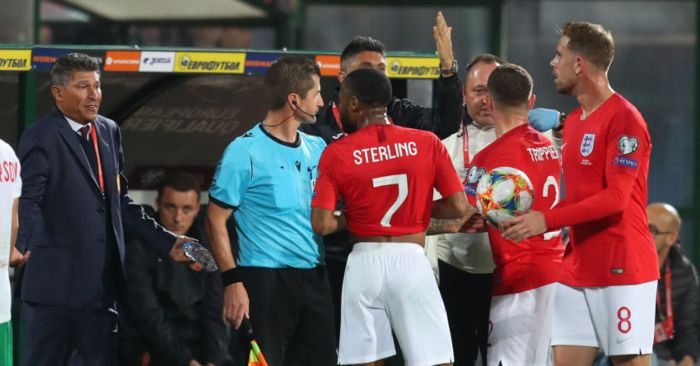 Bulgar display
The Sun and the Daily Mirror dedicate both their front and back page to the subject. The Daily Mail go with a powerful headline of ‘ENGLAND 6 RACISM 0’. Andy Dunn, Ian Ladyman and, hell, Neil Ashton all write considered, thoughtful pieces on a difficult, challenging night.

The Sun website resists every temptation to go with an exclusive, a revelation or Coleen Rooney’s basement as their lead story, but instead report that Bulgaria’s Prime Minister has told the chief of their FA to resign, with Raheem Sterling’s backing. The Daily Express and Daily Mail websites both go with the same.

The Daily Star adorn the top of their website with a Bulgarian journalist telling Gareth Southgate to f*** off. It’s racism but with added swears.

The Daily Mirror website unfortunately gave up all pretences by about 11am, with their lead story becoming:

Any coverage of the England game and abhorrent racism is below the final Golden Boy shortlist and a story on Tom Lawrence and Mason Bennett pleading guilty to drink driving. Because clicks really do conquer all.

But to the rest of those outlets who have largely given this story the platform it sadly warrants – regardless of your more questionable coverage on such issues in the past – well played.

What a load of Balaks
‘Bulgaria boss Krasimir Balakov was spot on when he said England has a bigger problem with racism than his own country,’ is Stan Collymore’s piping hot take in the Daily Mirror.

‘For some reason, we seem to find it easy to go to town on countries such as Bulgaria, saying things like, ‘They have a major problem, look how well we do’.’

Mediawatch is fairly confident no-one has ever said that. Certainly not anyone important enough to have part of a daily national newspaper column dedicated to them, anyway.

‘Yet the truth is we don’t always do well ourselves.’

‘Both Balakov and Gareth Southgate framed the things they said about the fight against racism well, and both were right when they said we should come together to get rid of this scourge.’

Southgate definitely ‘framed’ what he said well, reiterating what he has said numerous times before: “I’ve always said we have as many issues to resolve as anyone else.”

But Balakov? The man who said “I don’t think we have a problem” and “we don’t have this problem in Bulgaria, I can assure you of that” before the game? The man who said he “personally did not hear the chanting”, yet managed to cite English supporters “who were whistling and shouting during the Bulgarian national anthem” and who “used words against our fans which I find unacceptable” during the second half?

The same Balakov who said, of captain Ivelin Popov talking to Bulgaria fans at half-time in an attempt to defuse the situation: “It is probably because the fans were unhappy with the way the team was performing.” That Balakov?

Forgive Mediawatch for not thinking that his conduct was ‘spot on’ before, during or after the game.

Kane of my existence
Their importance obviously pales in comparison to the real story – it is just meaningless fun, after all – but the player ratings from England’s emphatic win do throw up a couple of entertaining titbits.

The Daily Mirror give Sterling (two goals, one assist) a 7/10. Marcus Rashford (one excellent goal and two chances created) gets the same mark, as does the ‘excellent’ Harry Winks and ‘impressive’ Tyrone Mings.

Harry Kane – with one goal and three assists – gets, you guessed it, a 7.

The Sun, who tend to use WhoScored.com for their ratings, randomly opt not to do so here. Kane (10/10 on WhoScored) therefore gets another 7/10 as he ‘put in the hard yards, and showed his unselfish creative side’.

Cheers for directly contributing to four of the six goals scored as captain, fella. Must do better.

Red Ross
No-one plays devil’s advocate quite as effectively (or as often) as Martin Samuel of the Daily Mail. His latest example is a classic of the genre:

‘Sunderland were in a play-off place the day they sacked manager Jack Ross. They had 19 points, trailing Wycombe in the automatic promotion slots by four, but with a game in hand.’

They were also as close in terms of points to 18th-placed Accrington as they were leaders Ipswich. And their five league wins this season came against teams currently in 16th, 17th, 19th, 20th and 21st. Seven wins in their last 21 league games for a club described by its owner as having “the best budget” and “the best squad” is hardly good enough.

Oh, and that four-point gap to Wycombe with a game in hand might not look so favourable when they face them away on Saturday.

And as Samuel himself will tell us, failure to earn promotion in 2018/19 was a decisive factor:

‘The owners no doubt thought Ross should have got them up last season, and was threatening to fall short again, but it’s early days.’

Precisely. So change managers now in the hope of engendering some sort of positive shift in results, performances and momentum. It’s better that than drawing every game 1-1.

‘He had lost two matches all season…’

…and won less than half…

It turns out that simply not losing matches is not the sole objective of a team that was in the Premier League two years ago.

He drew literally one-third of his games in charge. Mediawatch would recommend Sunderland fans were asked for their thoughts on whether he should have been sacked, but they might have to be woken from their slumber first.

He definitely won’t be sh*tting it about facing a team that have won their last 17 Premier League games in a row. It’s Martin Atkinson that has him worried.

Recommended reading of the day
Barney Ronay from Sofia.