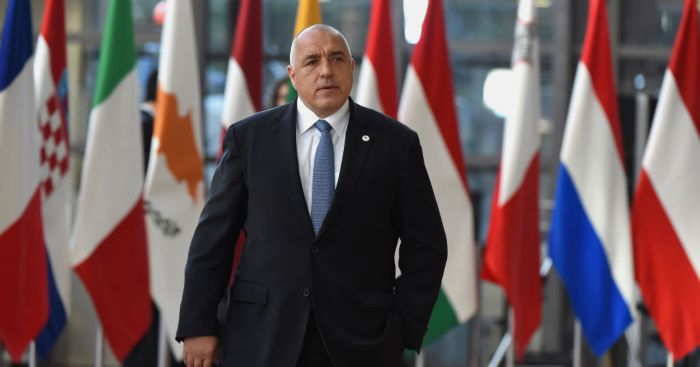 The prime minister of Bulgaria has called on the country’s football association president to quit after the Euro 2020 qualifier against England on Monday night was marred by racist chanting, according to reports.

England’s black players and backroom staff were subjected to abuse at various stages of the match, but the match was ultimately completed with England winning 6-0 in Sofia.

Sanctions from European football’s governing body seem sure to follow, and Bulgarian leader Boyko Borissov is now reported to have told the president of the Bulgarian Football Union, Borislav Mihaylov, to stand down.

“The government has done a lot for the development of Bulgarian football in the last four years.

“But after the recent events, having in mind the whole state of football and last night’s incidents, the prime minister has ordered me from today to suspend any relations with the BFU, including financial ones, until the resignation of Borislav Mihaylov.”

The governmental interference in the Bulgarian association is likely to attract the interest of football’s world governing body FIFA, and could result in further sanctions in addition to anything that may come from UEFA.

Mihaylov wrote to UEFA before Monday night’s match criticising the fact that England players had spoken about the potential for racist abuse at the match, calling it an “unjust branding” of Bulgarian supporters and urging UEFA to impose sanctions if England did not follow protocol.

Piara Powar, the executive director of the Fare network which had spotters inside the Levski stadium, said he believed some of the racism was motivated by a desire to create a problem for Mihaylov by certain supporters.

“They were getting involved in racism because they are racist, but also because they do not respect the leadership of the FA president,” he told the PA news agency.

“So when the FA president was telling them not to be racist before the match, it was almost a signal for them to contradict him and punish his leadership of the FA.”

Borissov (@BoykoBorissov) tweeted on Tuesday morning: “I strongly condemn the conduct of some of the fans at the stadium #BULENG.

“It is unacceptable that Bulgaria which is one of the most tolerant states in the world and where people of different ethnic and religious background peacefully live together should be associated with racism.”