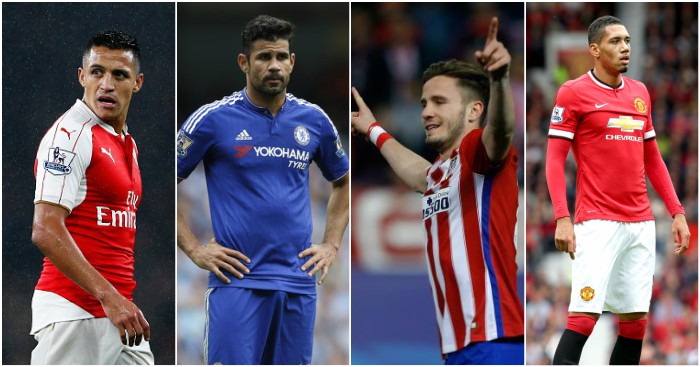 NOW IT’S DIEGO COSTA OFF TO CHINA?
Now Chelsea have enjoyed the rise of the Chinese Super League after selling Ramires and Oscar for silly money, but the latest rumour might be a lot less appetising. The Sun report that Chinese club Tianjin Quanjian are preparing an offer of £80m for Diego Costa.

The report also claims that Chelsea turned down a £50m bid for Costa last month, but that Costa’s agent Jorge Mendes is still trying to organise a deal. Isn’t he meant to be representing the player’s wishes?

An offer in the region of £80m would give Chelsea something to think about. Selling your best striker in January, when you’re sat on top of the league, would normally be considered very foolish indeed, but that is a massive sum of money. Alternatively, the whole thing could be nonsense, and the ‘source’ used by The Sun nothing but a minion of Mendes or Tianjin Quanjian trying to get a quick PR win.

EVERTON WANT CHRIS SMALLING
It’s pretty clear that, while most of the Premier League will tread carefully in the January window, Everton will be one of the biggest spenders. Ronald Koeman has made it clear to the club’s owners that the squad needs far more investment if they are to compete for a European place.

Virgil van Dijk is regularly being bandied about as a defensive option for Everton, but it’s the Star on Sunday (we know, sorry) who drop an interesting extra name into the mix. Rhys Turrell writes that Chris Smalling is also wanted by Koeman.

The story claims that Smalling will be the first out of Old Trafford should Victor Lindelof join in January, a move that has already had cold water poured all over it.

SAUL AND GRIEZMANN FOR MAN UNITED
Oh Duncan Castles, you lovely man. There was plenty to loathe about 2016, but the growing, one-sided love affair between journalist Castles and Jose Mourinho was really something to put joy in your hearts. Who says a journalist should search for the truth rather than trope out the PR line as fed to them by one person with an axe to grind? Oh, you all do.

Castles is back on New Year’s Day with an exclusive in the Sunday Times, namely that Mourinho will target Saul Niguez and Antoine Griezmann next summer in a double bid worth £145m. Jesus H that’s a lot of money.

Castles writes that this is ‘part of a plan to construct a squad capable of returning the Old Trafford club to the summit of the European game’, which is exactly Mourinho’s remit. He does need to make sure Manchester United qualify for the Champions League for that to happen.

Now we’re not saying that Manchester United won’t sign those two players. We’re just saying that Mourinho has leaked this information to Castles in order to keep fans buoyant. Which is fair enough.

SOME DREADFUL GUFF ABOUT JUVENTUS AND SANCHEZ
Oh good. We thought the guff about Alexis Sanchez leaving Arsenal had died down for a bit after Arsene Wenger said he wouldn’t be sold before the end of his contract.

The Daily Express, via calciomercato.com, report that Sanchez’s ‘long-standing talks are being closely monitored by bosses in Turin, with Juventus keen on making an offer for the Chile international’.

The story goes on to say that Juventus will not make a bid for Sanchez until next summer, but that they would like to import the Chilean back to Italy. Again, it would be weirder if they didn’t want to sign one of the form players in Europe.

AND THE REST
Slaven Bilic wants Glen Johnson to make a return to West Ham… Crystal Palace are keen on Manchester United’s Ashley Young… Joe Hart wants a return to the Premier League – and Liverpool are on his radar… Samuel Eto’o is ready to return to the Premier League – with struggling Hull… Arsenal teenager Gedion Zelalem is a target for Borussia Dortmund… Celtic are ready to make an £8.5m bid for Jordan Larsson… Liverpool are aiming to beat Spurs to Norwich winger Jacob Murphy this month, then loan him back to the Championship club for the rest of the season… Marseille are targeting a loan move for West Ham misfit Sofiane Feghouli… West Ham are pondering moves for Shane Long and Scott Hogan… Newcastle United have set their sights on a loan deal for Tom Cleverley, with Ruben Loftus-Cheek and Fabian Delph also possibilities.