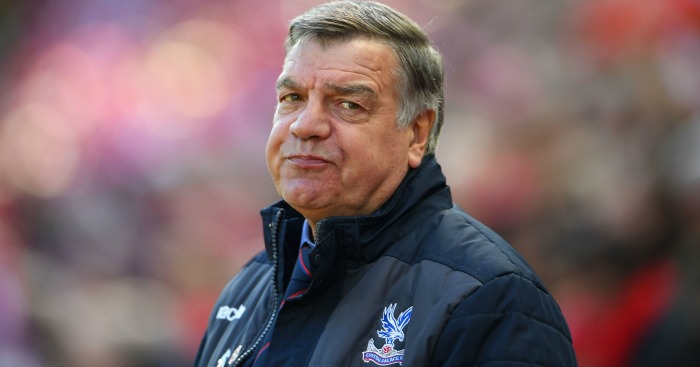 National Front Disco
It’s nearly December so it’s time to hear the old classics on the airwaves – Bing Crosby, Wham!, Roy Wood and Wizzard, Sam Allardyce claiming he could have managed Manchester United if only he had been christened Sam Allardicio.

Allardyce was raging on talkSPORT on Monday, angry at the notion that no British bosses are in the frame to manage Arsenal, while ‘winner’ Jose Mourinho has been appointed by Tottenham. The fact that massive club Chelsea have appointed Englishman Frank Lampard seems to have escaped him, as does the fact that Northern Irishman Brendan Rodgers would probably be an Arsenal candidate if he wasn’t actually, you know, managing a club higher in the table.

So who should be in line for a job at one of these big clubs?

“Sean Dyche has taken Burnley from obscurity into Europe. Europe, over a consistent level of games is much harder to achieve than winning a piece of silverware, where you play six or seven games and get to a cup final.”

Wise words there from a man who took a club into Europe but never won any major silverware.

It’s true that Dyche probably deserves a crack at a bigger club than Burnley – West Ham and Everton are under-achievers that spring to a sensible mind – but the idea that he could swap the Clarets for Arsenal is ludicrous.

“I don’t understand the logic, it just isn’t logic whatsoever; you cannot work at a smaller club and expect to get a bigger job by winning trophies…it’s an absolute nonsense.”

We absolutely agree with that notion; after all, managers of smaller clubs are far less likely to win trophies. But absolutely nobody is saying you have to win trophies to get a top job, which is why Mauricio Pochettino is a coveted man. You are – not for the first time – battling a straw man.

But what managers of smaller clubs do have to demonstrate is a style – whether that be in terms of tactics or man-management – that could be translated to a bigger club. Which is why Eddie Howe is mentioned whenever a bigger job becomes available but Dyche is much further down the list.

“The best way to get a Premier League job if you are British is to change your name to a foreign name.”

‘Foreign names’ like Brendan Rodgers, Frank Lampard, Chris Wilder, Sean Dyche, Eddie Howe, Graham Potter, Roy Hodgson, Steve Bruce and Dean Smith, all of which we have had to copy and paste because those nine names are all so damned confusing and foreign.

“I have always said if I was Allardicio I could have managed Manchester United.”

Pesky fact: Manchester United did appoint a British manager (with a British name) with no history of winning trophies; it was an absolute sodding disaster.

Pedigree chums
The Sun’s Chief Sports Writer Dave Kidd knows a good story when he sees one so talks up the prospect of Mauricio Pochettino joining Arsenal. We agree; it would be tremendous fun.

But we have to take issue with his reasoning on Max Allegri:

‘Former Juventus Max Allegri has no pedigree in English football. He would represent a shot in the dark similar to Emery’s appointment 18 months ago.’

Bollocks. Allegri has won six Serie A titles to Emery’s one Ligue Un championship. The fact that they are both foreign is literally all they have in common; Arsenal can only dream of somebody with Allegri’s pedigree.

Oh and do you know who else had ‘no pedigree in English football’ before they came and won Premier League titles? Pep Guardiola, Antonio Conte, Jose Mourinho, Manuel Pellegrini, Carlo Ancelotti, Roberto Mancini and some fella by the name of Arsene Wenger.

Simple Simeone
Over in the Daily Mirror, Stan Collymore also believes that Arsenal need a new coach and Diego Simeone ‘must be their man’. Yes, that’s Diego Simeone, manager of the team currently three points off the summit of La Liga and with one foot in the knock-out stages of the Champions League. That Diego Simeone.

‘The Arsenal board should now be testing Diego Simeone’s ambition and offering him the chance to test himself against Klopp, Mourinho and Pep.’

Mediawatch imagines that his ‘ambition’ might be to win the Spanish title for a second time, which is a real possibility with both Barcelona and Real Madrid below par. Swapping that ‘ambition’ for the chance to fight for fifth place in the Premier League would be the decision of a mad man.

‘His stock may not be as high as it was two or three years ago but he is a manager who is currently bossing a club that is identikit Arsenal: third-biggest in their league, third-most successful, in a new stadium, looking for the next level.’

Where to start with this? With the pesky fact that Arsenal have finished in the top three just twice in the last five years; Atletico Madrid have achieved that for seven consecutive seasons?

Or with the other pesky fact that, financially speaking, Arsenal are the fifth biggest club in the Premier League?

Or with the year of 2006, when Arsenal opened their ‘new’ stadium?

Apart from all that, Arsenal are exactly the same as Atletico Madrid.

Personal Jesus
‘Here is a list of teams Gabriel Jesus has scored against for Manchester City since the start of the 2018/19 season: Burton Albion (4), Shakhtar Donetsk (4), Everton (4), Wolves (2), Watford (2), Crystal Palace (2), Huddersfield (1), Oxford (1), Rotherham (1), Burnley (1), Schalke 04 (1), Brighton (1), West Ham (1), Preston North End (1),’ begins the latest propaganda from Liverpool.com, who are rather insensitively hailing Sergio Aguero’s latest injury as something that ‘could kill them, and gives even more life to Liverpool’.

Or could this be an exercise in very, very selective stat-grabbing to create an even more positive spin on a man’s misfortune and pain? Never!

‘Two things stand out. Firstly, the Brazilian striker loves playing against both Ukrainian side Shakhtar and Liverpool’s bitter rivals Everton. Secondly, there are not many sides that can be considered among the top bracket there aside from Tottenham (who have struggled this season) and Wolves (who exceeded expectations but still finished last season with just 57 points).’

One thing stands out to Mediawatch: He has not actually played more than a few minutes against any member of the top bracket; he has literally not started against Big Six opposition in that time-frame. And the time-frame is vital because Jesus actually scored against both Tottenham and Liverpool in April 2018. But forget that, because we must only study the time period in which Jesus has largely not actually faced teams from the ‘top bracket’ to prove that he is useless against teams from the ‘top bracket’.

‘Compare this with Sergio Aguero, who will miss the next few weeks of the season – according to his coach, Pep Guardiola – after sustaining an injury in Saturday’s 2-1 win over Chelsea. There are too many in both metrics to name (45 goals, 24 games with a npxG of over 0.5), but clubs include Liverpool, Manchester United, Arsenal, Chelsea and Tottenham.

‘Granted, the Argentine plays more minutes than his fellow South American (Aguero 4,469 vs Jesus 3,194), with Aguero also receiving more playing time against the bigger clubs. But that is not really relevant. This isn’t about what a player could do, but what he already has done.’

‘With Aguero now out, Jesus is likely to step into the breach (although Guardiola also referenced Raheem Sterling as a possible option up front) for Liverpool’s main chasers. He will definitely miss the Manchester derby on December 7, with Arsenal away and Leicester City at home after that. These are the sort of games Aguero is a key factor in; these are the sort of games, since the start of last season, Jesus has largely been a non-entity throughout.’

That is literally true. In these exact fixtures last season, Jesus played a grand total of 21 minutes.

‘Aguero is the closest thing to a guarantee for Guardiola, especially in the sort of games coming up. His xGA per 90 minutes of 1.14 is the best at the club, and although Jesus is second with 0.96, his sample size of 464 minutes is not big enough. ‘

Ah, so the sample size was big enough and indeed ‘irrelevant’ when it proved your point, but not big enough when it makes Jesus look like a pretty able deputy for Aguero.

And as for Aguero being a ‘guarantee’, he has scored only once (against Southampton) in his last six Premier League games, and somehow failed to score against ‘top bracket’ sides Liverpool and Chelsea.

‘With Aguero absent against United, and possibly beyond, Guardiola loses that certainty. Liverpool could benefit from City’s misfortune. That is also for certain.’

(As long as you ignore some of the evidence that does not suit our rah rah rah Reds narrative.)

Recommended reading of the day
Sid Lowe on flawed Barcelona