Home All The News Burnley 0-3 Liverpool: Klopp’s men move into the top four 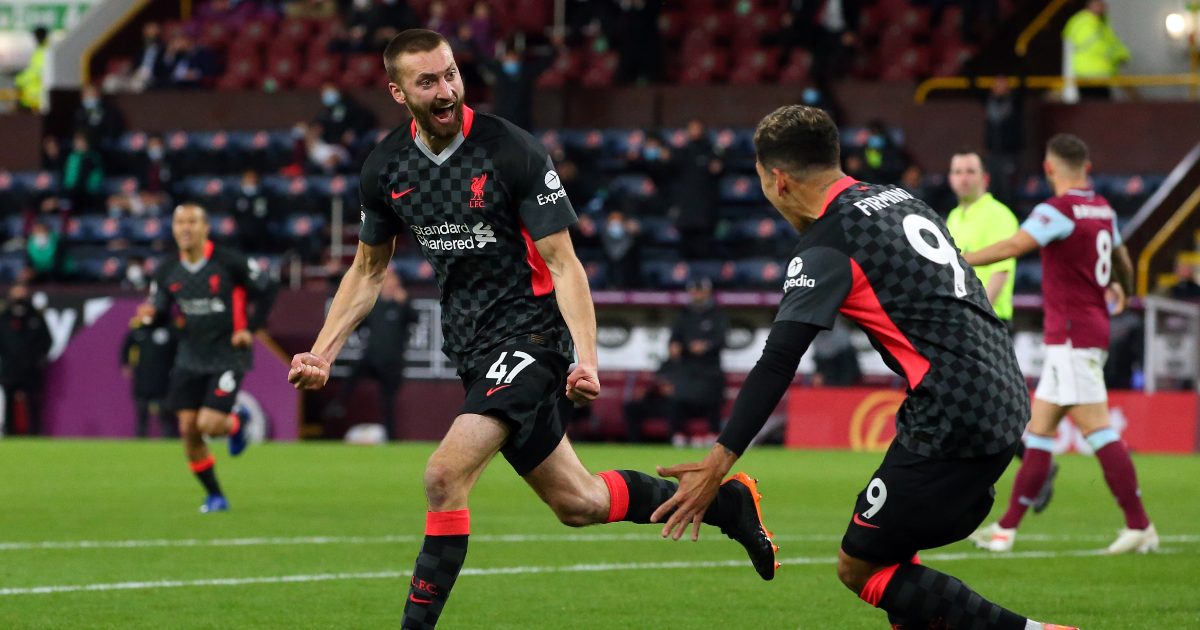 It was far from pretty – their encounters against the Clarets rarely are – but it was essential as the result put them ahead of Leicester on goal difference.

And with a four-goal cushion Jurgen Klopp’s side know if they match the Foxes’ result against Tottenham in their final home match of the season against Crystal Palace they will have pulled off an impressive comeback from two months ago when, for a time, any European football looked beyond them.

Even third place may be up for grabs should Chelsea stumble at Aston Villa, whose victory earlier in the evening had guaranteed Liverpool Europa League football at the very least.

But they were indebted to Roberto Firmino’s strike late in the first half, back-up central defender Nat Phillips’ first senior goal early in the second and Alex Oxlade-Chamberlain’s first goal of the season to put a place among Europe’s elite back on the table.

Winning a fourth successive league match for the first time this season means they go into the final day as the Premier League’s most in-form team with 23 points from the last 27 available.

Back in January Burnley ended Liverpool’s 68-game unbeaten home league run with their first win at Anfield since 1974 but the visitors would have fancied their chances against goalkeeper Will Norris, making his Premier League debut for the club.

With Nick Pope failing to recover from a knee injury, Sean Dyche decided to drop Bailey Peacock-Farrell as he had conceded 14 in four league matches this season.

Norris’ only previous top-flight appearance was as an 89th-minute substitute for Wolves two years ago and he spent last season on loan at League One Ipswich but the visitors were criminally wasteful and he barely touched the ball never mind making a save.

Mohamed Salah, Sadio Mane and Firmino all had early sight of goal, Mane’s miss the most embarrassing as he bundled wide from close range from Trent Alexander-Arnold’s cross.

Thiago Alcantara, the only Liverpool player seemingly not panicked by Burnley’s in-your-face approach, then joined the ranks of missed chances when his angled shot flew across the face of goal.

Salah (again), Alexander-Arnold and Phillips all shot over while Mane was blocked by the sliding James Tarkowski as the visitors racked up 11 shots without one on target.

Conversely, a Dwight McNeil drive had forced Alisson Becker to palm behind while Chris Wood fired into the side-netting after a long ball caught both Rhys Williams and Alisson in two minds.

The hosts had been so successful in disrupting the former champions’ rhythm that there was an air of desperation building right up until the moment Firmino struck two minutes before the break.

Andrew Robertson was again the provider with his low cut-back met first time by the Brazil international who in going past Fernando Torres’ club total of 65 became the first Liverpool player to score on three successive visits to Turf Moor.

One goal never seemed likely to be enough and Salah firing into the side-netting soon after the restart did little for the nerves and when the crucial second did come it was an unlikely source.

Phillips, so good in the air at the other end, rose highest to plant a header past Norris from Mane’s cross and then proved his worth under his own crossbar by heading Tarkowski’s effort of the line.

They avoided one or two anxious moments as Burnley stepped up the pressure before Oxlade-Chamberlain drilled home in the 89th minute to lift them back into the top four for the first time since February.