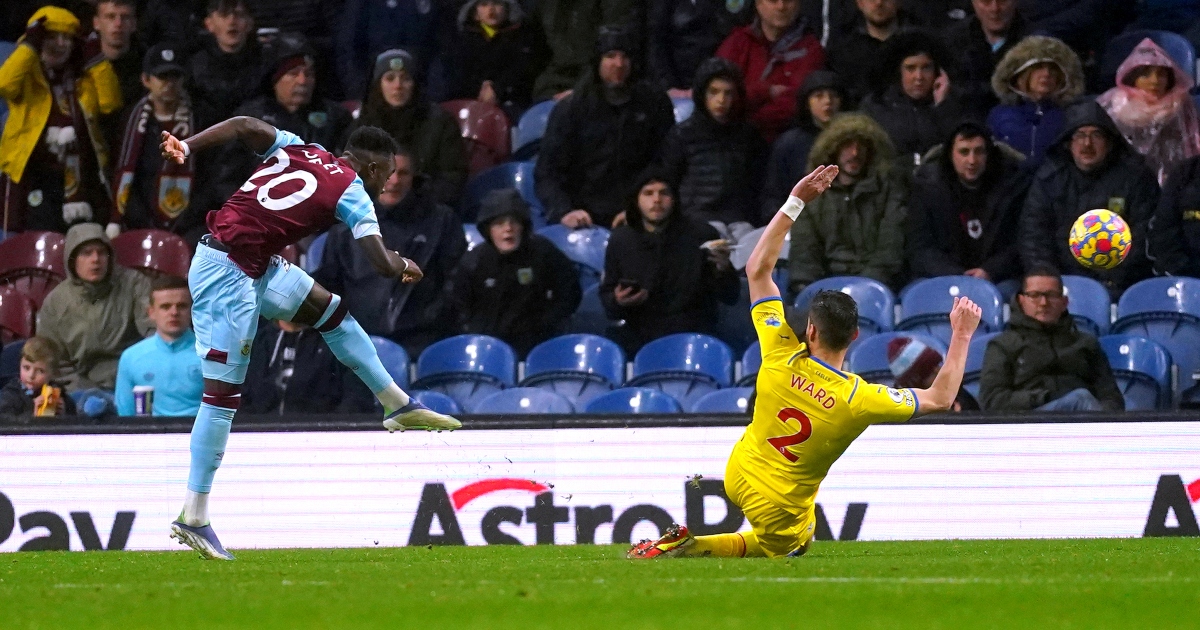 Maxwel Cornet’s superb strike earned Burnley a point against Crystal Palace in a thrilling fixture at Turf Moor, with neither side able to grab a winner.

In dreary conditions Cornet lit up Turf Moor with a stunning finish four minutes into the second half, levelling the scores after a breathless first half in which Palace came from behind to lead 3-2, but only after letting slip an early 1-0 advantage.

Christian Benteke scored twice, either side of headers from Ben Mee and Chris Wood before Marc Guehi gave the visitors the lead at the break.

It was a point which will give both Sean Dyche and Patrick Vieira confidence their sides are on the right track – Burnley seem to have left behind their early-season woes and are steadily collecting points, while Palace are now unbeaten in seven and on the fringes of the top six.

Palace needed eight minutes to take the lead with Conor Gallagher, fresh from his England debut, starting a move that was finished by Benteke.

Cornet could only head Gallagher’s cross to Joachim Andersen, who quickly found Benteke by the penalty box. The Belgian, who scored for his country against Estonia last week, took a touch before poking the ball through James Tarkowski’s legs and in off the post.

Seconds later Palace had a chance to double their lead as Benteke played in Gallagher, but he shot tamely at Nick Pope.

That miss proved costly as Burnley levelled in the 19th minute with Mee rising to meet Ashley Westwood’s corner with a strong header.

It was the start of a frantic spell. Johann Berg Gudmundsson tried to flick home Dwight McNeil’s low ball but Vicente Guaita saved.

Burnley thought the ball was trickling out for a corner but Guehi cleared, setting up a swift counter in which Benteke turned Wilfried Zaha’s cross into the side-netting.

Zaha then got into a tussle with Tarkowski which saw both players booked, ruling Tarkowski out of next weekend’s match against Tottenham.

But the defender’s next involvement was to set up Burnley’s second, nodding McNeil’s free-kick back across goal for Wood, whose header had just enough power to beat Guaita and give the New Zealander his 50th Premier League goal.

Palace responded as Gallagher, Andersen and Benteke combined again, with Andersen’s long ball forward collected by Gallagher, who controlled, shook off Charlie Taylor and squared for Benteke to power home.

Palace’s third followed five minutes later. Pope made a superb save to deny Andersen from close range following a corner, but Guehi was on hand to thump home the rebound.

Burnley were out early for the second half, eager to make amends, and quickly set about doing so as Cornet scored the pick of the goals – his fifth in a Burnley shirt.

Tarkowski flicked on Gudmundsson’s cross and the Ivorian met the ball flush on the volley at the far post to thump it into the roof of the net.

Burnley fans were then up in arms as Wood got goal side of Andersen before tumbling to the floor, but referee Simon Hooper waved play on and the VAR check yielded nothing.

Burnley had done a good job of keeping Zaha quiet but he rattled the crossbar with a powerful volley just after the hour.

Both sides had late chances for a winner – McNeil’s cross found Tarkowski but his header was held by Guaita, while Luka Milovojevic’s drive was deflected over.

Then, in stoppage time, substitute Matej Vydra controlled a high ball from Westwood to bring a fantastic save from Guaita – but neither side deserved to lose this one.