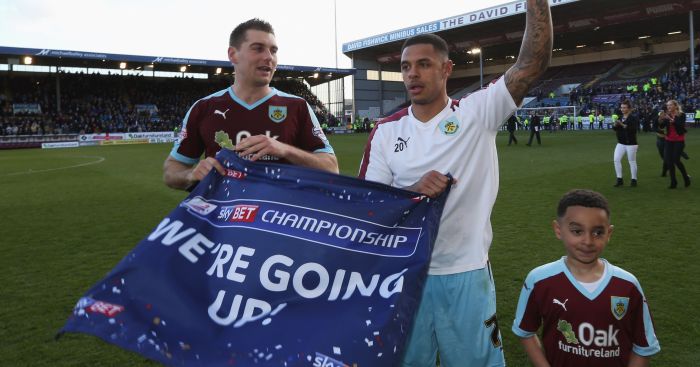 Sam Vokes sealed Burnley’s return to the Barclays Premier League at the first attempt with a brilliant headed winner against QPR kicking off a promotion party at Turf Moor.

Sean Dyche’s side came into the match knowing victory would guarantee them a top-two finish in the Sky Bet Championship and the Wales international delivered a 1-0 victory in the 61st minute, rising highest to convert David Jones’ free-kick.

Few could argue the Clarets deserve to retake their place at the top table, and the record-breaking riches that will follow next term, having stretched their unbeaten run to 22 matches dating back to Boxing Day.

They suffered a mild bout of stage fright in the first half but controlled the second, proving they are the division’s most efficient outfit, loaded with grit, determination and pedigree goalscorers.

Vokes saw a second goal chalked off for a foul with 10 minutes to go, moments after Matt Ingram’s instinctive save denied the deserving Scott Arfield.

The margin may have been slim but the second-half display was powerful, as Dyche’s men refused to let their fate linger another match.

There had been no shortage of endeavour from in the first half – Joey Barton probing and pressing without luck, George Boyd always available to take a pass and Arfield harrying the visitors tirelessly in the channels.

But there was a palpable disconnect between the midfield and forwards Vokes and Andre Gray.

Gray has enjoyed a fine season, leading the division’s scoring charts with 24, but after netting just once in his last five outings he seemed short of conviction here.

His first decent chance, after good work by Barton and Vokes, ended with an air shot and a cry of frustration.

Vokes was gifted a sight of goal in the 22nd minute after Cole Kpekawa’s soft clearance but while the defender appeared to deflect the shot with his hand, referee Jonathan Moss let play continue.

QPR gradually picked up on a growing frustration and it needed an alert Tom Heaton to keep the scores level.

He was called on to save three shots from distance, getting down and across well to parry Matt Phillips’ strike and comfortably catching a later snatched effort from the winger.

Just after the half-hour mark Junior Hoilett almost caught the keeper unsighted in a packed box, but Heaton got his body behind the ball and gathered at the second attempt.

He continued to be busier than he would have liked, bravely diving at Michael Petrasso’s boots to smother a chance created by Kpekawa’s long ball over the top.

But Burnley were back on the front foot after the interval, Arfield going close in the 49th minute.

After a hanging free-kick dropped awkwardly in the area a deflected clearance fell to Arfield, who hit a careful side-foot volley that drifted over Matt Ingram and narrowly cleared the crossbar.

The hosts came again, Gray sneaking past Grant Hall on the left but opting to shoot when Vokes was better placed.

The next time the Welshman found himself in a scoring position it was a different story.

He bested Nedum Onuoha to meet the free-kick, conceded by Clint Hill and delivered with precision by Jones, and headed home with both placement and power for his 14th of the campaign.

The celebrations were gleeful on the field and in the stands, with just half an hour separating the Clarets from their Premier League dream.

Progress was not scare-free – things seldom are in the Championship – with Alejandro Faurlin rattling the post in the 69th minute with a 25-yard rocket.

But Burnley ended dominant, Arfield certain he had scored after Vokes’ back-heel only to see Ingram throw out a foot and divert the ball wide.

Vokes headed home for a second time on 80 minutes but Moss’ whistle was close behind.

When he blew again to end the game, supporters poured onto a pitch that will again host top-flight football next season.