Home All The News Burnley boss Dyche: We gave Liverpool three of their goals 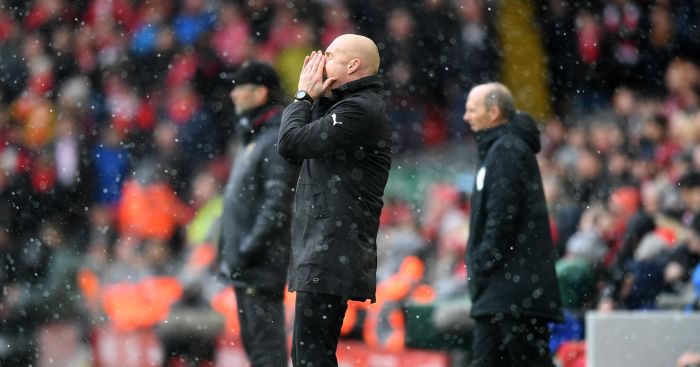 Sean Dyche thinks his side “gave” Liverpool three out of four of their goals in Burnley’s 4-2 loss at Anfield on Sunday.

Ashley Westwood’s controversial first goal for the Clarets gave Dyche‘s men a 1-0 lead before two goals from Roberto Firmino and another from Sadio Mane looked to have sealed the match for the Reds.

Substitute Johan Berg Gudmundsson did score a goal in added time at the end of the match to scare Liverpool but another from Mane moments after secure the three points for Jurgen Klopp’s outfit.

“It was tricky,” Dyche told BBC Sport. “The wind was swirling. We wanted to ask questions and get the ball forward which I thought we did in spells.

“You cannot give a team like Liverpool four goals – we certainly gave them three. You can question the errors but we certainly made a game of it.

“In the first half I don’t think they had too many golden chances yet we were 2-1 down. Even at 3-1, the mentality of the group was good and we got a goal back.

“If you had said to me that we would have 30 points after this stage of the season I would certainly have take it.”

On 19-year-old Dwight McNeil’s performance, Dyche added: “He was absolutely outstanding. He’s been a big factor in out turnaround this season.”