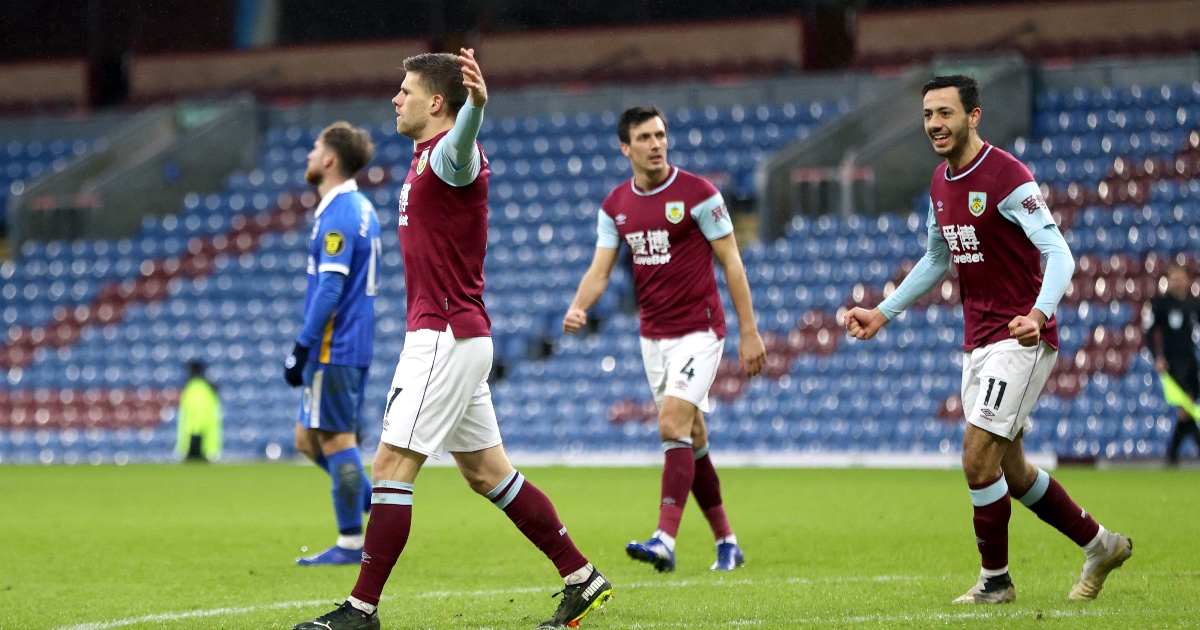 Johann Gudmundsson amended an early mistake by bagging the leveller in a 1-1 draw for Burnley against Brighton, as both sides inched further away from the Premier League relegation zone.

Lewis Dunk’s towering header from a corner sailed into the net, despite the presence of Gudmundsson at the back post, with the Iceland winger seeming to lose his footing at the crucial moment.

However, Gudmundsson’s strike eight minutes after half-time ensured an eighth draw in the most recent 11 meetings between the teams, with ex-Brighton striker Ashley Barnes denied by an offside flag shortly after the equaliser.

Burnley remain 17th but are now nine points clear of the bottom three after earning a share of the spoils here, while Brighton are 11 ahead of 18th-placed Fulham after extending their unbeaten run to six matches.

They had claimed a shock win over defending champions Liverpool in midweek and beaten Tottenham last Sunday.

The visitors would have fancied their chances after going ahead but ultimately had to settle for a point.

Given the recent history of results between the teams, it was perhaps no surprise there was little separating them early on, with the inclement weather adding an extra layer of difficulty.

A rush of blood from Ben Mee saw him booked for upending Neal Maupay. Burnley then upped the tempo, with Dwight McNeil’s crafty free-kick looking to be creeping in at the near post, only for Robert Sanchez to be alert to the danger.

The Brighton goalkeeper then clawed away James Tarkowski’s shot from the resulting corner and Burnley’s inability to capitalise on their brief spell of pressure cost them as they fell behind when Dunk headed home.

Dunk was allowed to rise unchallenged to meet Pascal Gross’ corner in the 36th minute and although Gudmundsson was at the back post, the Iceland winger got in a tangle and seemed to slip in his attempt to clear.

Jack Cork curled over as the side that came into this game as the division’s lowest scorers responded well to the goal, before McNeil stung Sanchez’s palms after Aaron Connolly drew a save out of Nick Pope at the other end.

The driving rain stopped as the second half began and Gudmundsson made up for his earlier slip-up by clearing off the line from the same position after Dunk had once again headed towards goal.

Gudmundsson went one step further as he got the equalising goal in the 53rd minute, drilling low past Sanchez after the Spanish shot-stopper had parried McNeil’s fizzing effort.

Gudmundsson then provided the cross which saw Barnes direct a header beyond Sanchez but Burnley’s euphoria at two quickfire goals was immediately extinguished by a raised flag, with Matej Vydra in an offside position.

Vydra was denied by a point-blank save from Sanchez after being put through and Brighton head coach Graham Potter introduced Danny Welbeck, Leandro Trossard and Adam Lallana off the bench in an attempt to halt the one-way traffic.

Both sides had appeals for penalties turned down, with Barnes and Alexis Mac Allister denied after going over in the area, and neither team could fashion anything late on as they each claimed a point.