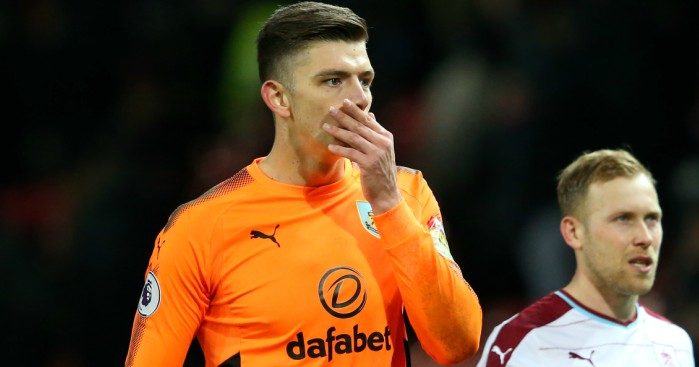 Nick Pope is beginning to be talked up as an England goalkeeper in the making, but the 25-year-old is not even certain how long he will hold on to his shirt at Burnley.

Pope was third choice at Turf Moor last season and expected to spend the current campaign watching from the bench after Paul Robinson’s retirement bumped him up the pecking order.

But he was thrust into centre stage when Tom Heaton injured his shoulder in September and has gone from strength to strength since inheriting the gloves.

That has led to speculation about an England call-up next year, with Robbie Savage among those supporting the notion, but Pope is taking a more cautious view.

Given Heaton’s status as Burnley captain and a regular Three Lions squad member over the past two seasons, his return to fitness in the new year could prove an even bigger challenge than catching Gareth Southgate’s eye.

“When the time comes, we’ll cross that bridge when we get there. It’s not at the moment so we’ll have to wait and see what happens,” said Pope ahead of Saturday’s year-ending trip to Huddersfield.

“I am the one playing at the minute but football, as everyone knows, changes quickly.

“I’m not going to get complacent. You can get clipped back quickly in this game if you get slack, or take your eye of the ball. I am definitely aware of that.

“It was nice of Robbie to say those things about me (playing for England). I am not going to stop him saying that but that’s outside noise. To be thinking about it would be getting ahead of myself.”

While only Sean Dyche knows who will get the nod when both men are available, Pope is certain about one thing: there will be no fallouts between the pair.

Heaton is renowned as a true team player, an influential and supportive presence during his lengthy lay-off, and Pope is prepared to play the same role should he return to under-study duties.

“He’s been in the training ground near enough every day. He has helped me out a lot to be honest,” said the former Charlton keeper.

“He’s a great professional and a top all round person. A real club captain and leader, and still fulfils that role even though he is not in the team and injured.

“It’s a competition, like you would have at every club, but we have a great goalie group. There will be no problems, I can assure you of that.

“We have worked together over a year and have a great relationship on and off the pitch. He is a friend of mine. We’ll push each other to make other better, definitely.”