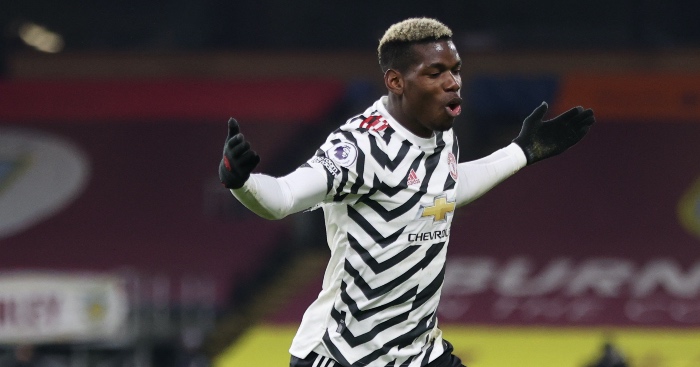 Paul Pogba fired Man Utd to the top of the Premier League table with a 1-0 win at Burnley.

The France midfielder’s deflected volley in the 71st minute was enough for a hard-earned victory in a match full of VAR controversy.

United move three points clear of Liverpool ahead of their showdown at Anfield on Sunday.

Not for the first time in the evening, VAR took centre stage in the 32nd minute.

Robbie Brady appeared to have brought down Edinson Cavani as the Manchester United forward – back after a three-match ban – looked to get clear around 25 yards out.

After referee Kevin Friend initially showed the Burnley man a yellow card, the incident was reviewed by VAR.

Friend went over to the pitchside monitor to check a potential earlier foul by Luke Shaw on Johann Gudmundsson before the United breakaway.

Following several replays, the referee instead awarded Burnley a free-kick, showing United defender Shaw a yellow card and so the possible red card against Brady was ruled out, with his caution rescinded.

United thought they had taken the lead in the 37th minute when Harry Maguire headed in at the back post, but the captain was adjudged to have fouled Burnley defender Erik Pieters as he jumped.

Just before half-time, Burnley keeper Nick Pope produced a fine save from Anthony Martial’s curling shot towards the top corner.

Soon after the restart, Cavani spurned a glorious opportunity to break the deadlock when he scuffed his shot straight at Pope from close range after being picked out by Bruno Fernandes.

United eventually made the breakthrough in the 71st minute.

Marcus Rashford got clear down the right and clipped the ball back across to the edge of the penalty area, where Pogba sent a volley goalwards which deflected off Burnley defender Matthew Lowton and past Pope.

VAR was again in action during the closing stages for a review of a potential handball by Maguire in a crowded six-yard box, but no penalty was given.

The victory puts Man Utd ahead of Liverpool in the Premier League on 36 points from 17 matches.