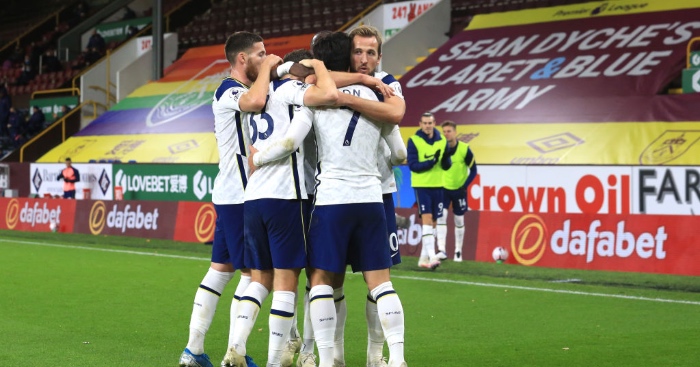 Heung-Min Son continued his fantastic start to the season as Tottenham returned to winning ways in the Premier League by edging out Burnley in a hard-fought affair at Turf Moor.

Moments after Harry Kane had cleared off the line to deny Burnley defender James Tarkowski the opener, the England captain provided the assist for Son to head home in the 76th minute.

The South Korean’s eighth top-flight goal of the campaign proved the difference as Spurs held on to claim a 1-0 victory, drawing a line under conceding three goals in the last 10 minutes against West Ham.

FEATURE: Rashford is driving football as a vehicle for societal change

Burnley’s winless start to the season was therefore extended after the Kane-Son axis once again helped a lacklustre Spurs to all three points.

The pair have been prolific in the early stages of the campaign – Kane has scored five goals and claimed his eighth assist on Monday night – with Tottenham scoring 31 times in their last nine matches.

They did not register a shot on target in the first half while Jose Mourinho resisted the urge to bring on Gareth Bale, who is still waiting for his first Premier League start in seven years.

Mourinho responded to the West Ham mishap by bringing back Eric Dier to shore up the defence in one of seven changes to the side that beat LASK in the Europa League, with Bale settling for a place on the bench again.

Dier’s centre-back partner Toby Alderweireld needed his head bandaged after being caught by Ashley Barnes’ trailing arm in an aerial challenge during a subdued opening from both sides.

Tottenham saw plenty of the ball but were largely stifled by a compact Burnley defence, with Son, who had scored nine goals in his previous eight matches in all competitions, given no space to exploit in the final third.

Burnley had the ball in the back of the net through Ashley Barnes but he had strayed a couple of yards offside while it was not until the 38th minute that a stultifying game up to that point had its first shot on target.

From the edge of the area, first Ashley Westwood and then Johann Berg Gudmundsson forced Hugo Lloris into making low saves, the second shot more testing but still comfortably dealt with by the Tottenham goalkeeper.

Burnley’s greater urgency continued into the second half but they were largely kept in check, with Alderweireld putting his body on the line to block a brace of shots from Chris Wood.

The game burst into life in the final 20 minutes as Tarkowski rose highest to meet Westwood’s corner but Harry Kane headed off the line to deny Burnley a certain goal.

Moments later at the other end, Son hesitated after going through, allowing Kevin Long to track back and get a last-ditch tackle in, but the South Korean would not be denied again as Tottenham broke the deadlock.

Substitute Erik Lamela’s corner was flicked on by Kane towards the back post, where Son directed his header expertly into the top corner.

Lamela was perhaps fortunate he did not receive at least a caution after showing his studs in a challenge on Dwight McNeil, who was able to continue, while Burnley were unable to fashion anything meaningful as Spurs claimed their first clean sheet in the league this season.