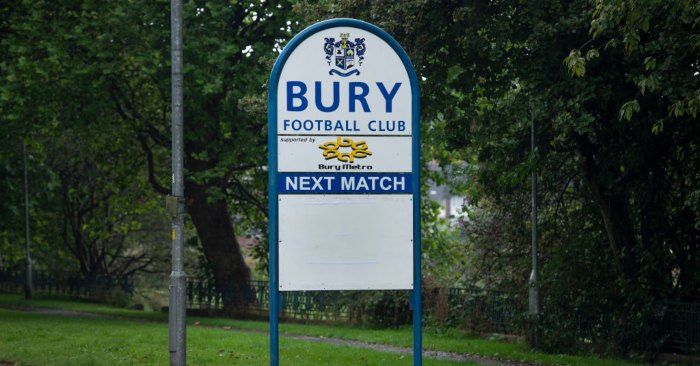 See you next week.

But what if your team doesn’t have a next week? Bury fans have been robbed of theirs despite nourishing their 134-year-old club through industrial revolutions, world wars and everything else working-class Britain has thrown at them.

“We shall shake ’em! In fact we are the Shakers” became the tagline for an outfit that won two FA Cups and a thousand games in each tier of professional English football only to be decimated by a two-bit arsehole using company law.

Gigg Lane, one of the oldest football grounds on the planet, received no protection fit for its heritage and has been mortgaged to the hilt by people that value the land under the pitch more than the sport played on it.

Loyal fans, who, by and large believed the bollocks of “pay your money, we’ll do you right” have been shat on from a great height.

Bury fans won’t hear the beeps of their phones with banter texts telling how rubbish they are. They won’t feel the rustling beauty of the fixture lists in Saturday papers or the concrete welcome of stadium steps. They won’t smell the burger onion intoxication or taste the bittersweet of the first match-day pint. They won’t see the impossible greenery of the pitch or the darkness of their eyelids, as they blink, before opening them to white light as a goal goes in.

They won’t hear hear the roar, that roar as magnificent in Manchester as it is at the Maracanã.

They won’t sense the weekly embrace of a dysfunctional family, wrapped up in nylon jerseys and expectancy. They won’t find their escape.

For the rest of us, a fog over August football. The selfishness of the football fan cut through with the knowledge that it could have been our team and it soon might be.

A forlorn league where the idea of a free flow up the divisions is no more and the better you do, the more bastards you attract. A nuclear landscape where survival is your lot, community giants are cut off at the knees and shut up because the Champions League draw is starting.

Stop all the stadium clocks.