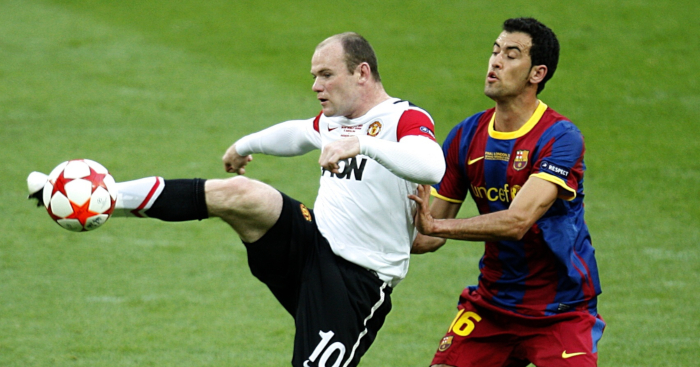 Sergio Busquets recalls Wayne Rooney asking for Barcelona to be merciful in their Champions League 2011 final win over Manchester United.

Barca beat United 3-1 in a rather one-sided final at Wembley, with Rooney’s 34th-minute equaliser their only shot on target all game.

The La Liga champions, then managed by Pep Guardiola, were at their imperious best as what many believe to be one of the greatest sides of all-time.

“They’re the best in Europe, no question about that,” said Sir Alex Ferguson at the time.

“In my time as a manager, I would say they’re the best team we’ve faced. Everyone acknowledges that and I accept that. It’s not easy when you’ve been well beaten like that to think another way.

“No one has given us a hiding like that. It’s a great moment for them. They deserve it because they play the right way and enjoy their football.”

In an interview with The Guardian, Busquets recalls Rooney asking for mercy towards the end of the game.

“‘That’s enough, you’ve won,” he remembers the forward saying. “‘You can stop playing the ball around now.'”

The midfielder himself feels it “was the best performance of Pep’s era”.

“Beyond the way we enjoyed it on the pitch, that recognition from opponents – and we’re talking about incredibly important people – leaves you feeling pride and gratitude,” he said.

“Sometimes you can be frustrated when the opponents are so much better but instead they said things like that. It’s the highest praise. We hurt them a lot keeping the ball; they spent a lot of time running after it.

“That was the best performance of Pep’s era, where our success, our superiority, was most overwhelming – a demonstration of how we wanted to play.”