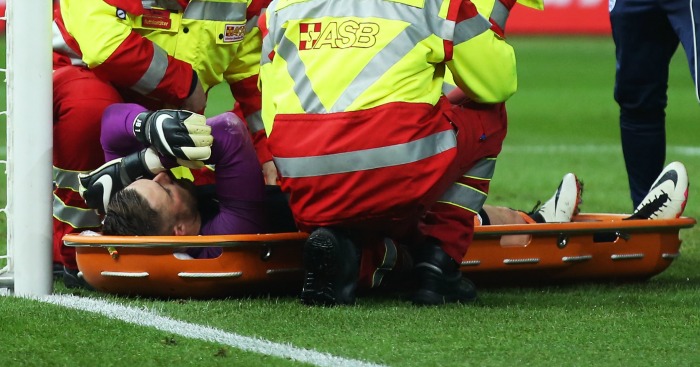 Jack Butland is facing up to the potential disappointment of missing out on Euro 2016 after suffering a fractured ankle.

The Stoke goalkeeper admitted he was ”absolutely devastated” after the extent of the injury he suffered in Saturday’s 3-2 victory over Germany was made public.

The Football Association said in a statement on Sunday evening: ”Goalkeeper Jack Butland will miss Tuesday night’s fixture against the Netherlands at Wembley Stadium after fracturing his ankle.

”The Stoke City man sustained the injury in the first half of Saturday’s 3-2 victory over Germany in Berlin and has now returned home.”

Such injuries usually require months of recovery time, and with the tournament in France just 10 weeks away it seems inevitable Butland will be spending the summer at home.

He tweeted: ”Today’s scan revealed I’ve fractured my ankle, absolutely devasted (sic)! I’ll be doing everything I can to get back fit as soon as I can!”

Butland picked up the injury just before Toni Kroos opened the scoring in Berlin but did not kick the ball out when he had the chance and was then beaten from long distance before staying down as Germany celebrated.

The hosts doubled their lead but Roy Hodgson’s side hit back to win 3-2.