Home All The News Butland: Hart’s struggles have ‘opened the door’ for England 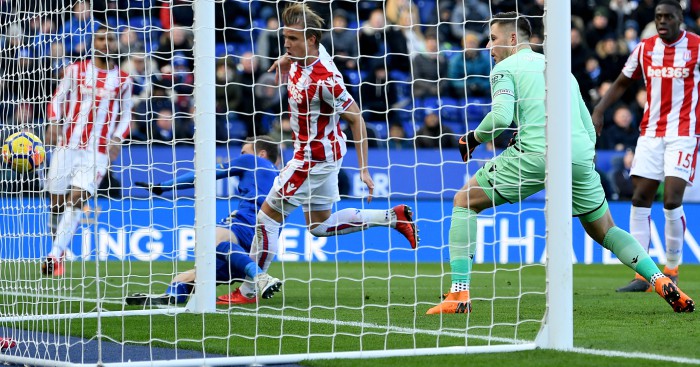 Jack Butland has put his gaffe against Leicester firmly behind him as he looks to secure the England number one jersey for the World Cup this summer.

The Stoke keeper made a rare blunder last weekend as, with the Potters in sight of a precious three points, he misjudged a Marc Albrighton cross that bounced off him and into the net.

Stoke had to settle for a 1-1 draw but Butland, although disappointed, felt his reaction showed his maturity, with the 24-year-old then producing a fine save to deny Riyad Mahrez.

He said: “It happens as a goalkeeper. Three or four years ago maybe it would have affected me for a bit longer but I felt like I was able to bury it pretty quick and fortunately was able to help us out towards the end of the game.”

The result left Stoke stuck in the relegation zone but, while Butland must focus on trying to help the Potters avoid the drop, the World Cup looms ever closer.

It is hard to remember a more competitive goalkeeping situation, with Butland, Joe Hart, Jordan Pickford, Tom Heaton and Nick Pope, who has performed so well with Burnley during Heaton’s injury lay-off, all fighting it out for three places in the squad.

Hart’s recent absence from the West Ham side has added a new dimension and Butland is clear that he is targeting the number one spot.

He said: “I’ve always felt it’s all in my own hands. If I make sure I’m playing well enough then there’s always a chance that I’ll be able to get into the squad.

“With Joe not playing at the minute, it’s opened the door a little bit. Joe’s still an incredible keeper and is England’s number one and I guess for others it’s an opportunity to show what they’re about and try and stake a claim for the number one spot.

“It’s certainly something I’m trying to do but so is Jordan Pickford, so is Nick Pope and a few other guys.”

Stoke’s poor form led to the sacking of manager Mark Hughes in January and the Potters have improved in the five games since Paul Lambert took over, losing only one, winning one and drawing three.

Butland has been very impressed by the former Aston Villa, Blackburn and Wolves boss, saying: “The manager’s come in with a zero tolerance, no-nonsense kind of attitude in terms of knowing exactly what’s expected to win Premier League games and survive.

“I think too much over the first part of the season we hadn’t hit heights in terms of running stats, winning tackles, we were always losing battles. He’s come in and re-energised people, given the belief back and really got people playing a lot better.

“We’re playing with a lot more intensity and causing teams a lot more problems than we were. We’ve given ourselves a lot to do but it’s all in our hands now.”