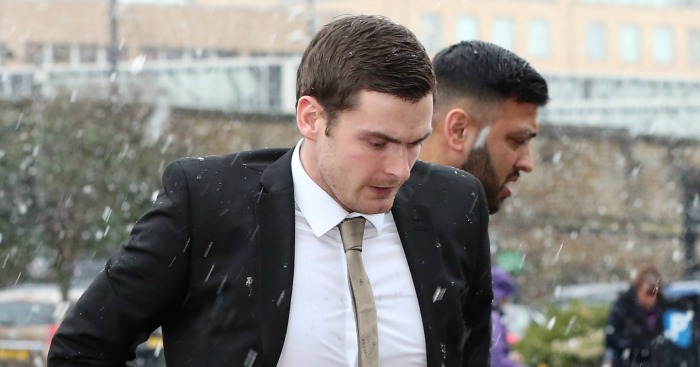 Johnson was suspended a year ago then allowed back into the team and played for the Premier League strugglers until his trial when he pleaded guilty to grooming and a sexual activity with a child.

Pressure was put on the club after Johnson’s legal team told Bradford Crown Court the club was aware that he had told police he kissed the girl.

The club had stated he had told them he intended to deny all the charges against him.

Here is her statement in full:

“In light of recent speculation and media coverage I wish to clarify a number of points relating to my handling of the Adam Johnson issue.

I first met with police representatives after Mr Johnson had been arrested and whilst he was still in custody.

At this time they outlined the nature of the allegations but did not go into detail as he had not been interviewed or charged at this point.

After this meeting with the police I took the decision to suspend Mr Johnson, which was agreed by the club’s Board and chairman.

This suspension was lifted after two weeks, after the club’s position was considered with external legal advisers and the PFA.

Mr Johnson had still not been charged with any offence.

Mr Johnson maintained, as he did throughout the entire process, that he would strenuously fight all charges.

Mr Johnson asked me for a recommendation regarding legal representation and I arranged for him to meet Orlando Pownall QC.

Mr Johnson’s father sent me some documents that he asked me to forward to Mr Pownall, which I did.

I did not examine the contents of these documents in any detail.

Because I had recommended Mr Pownall, I attended part of the introductory meeting at which Mr Pownall met with Mr Johnson.

After this meeting, Mr Pownall sent me a note to forward to Mr Johnson which recorded, amongst other things, that Mr Johnson had kissed the victim and communicated with her.

I did not share this information with anybody including the board of Sunderland AFC.

In the following days, Mr Johnson engaged Mr Pownall and changed his legal team and he confirmed to me that he was intending to defend each charge.

He told me that he was confident of a successful outcome.

I did not meet Mr Pownall again and I played no part in respect of plea decisions that he made with his legal team.

Contrary to what has been suggested, I did not understand that Mr Johnson intended to change his plea at trial or at all.

I was astounded when he did plead guilty.

I accept that Mr Johnson should not have been permitted to play again, irrespective of what he was going to plead.

It was a serious error of judgment and I accept full responsibility for this.

The club’s Board was made aware of the broad nature of the allegations, which were a matter of public knowledge, but not of the detail that I was personally privy to.

Based on the information that I had and satisfied that risk assessments had been made, safeguarding measures put in place and the appropriate bodies consulted, I understood the legal process would run its course.

Mr Johnson remained innocent until proven guilty and I was concerned that any action taken by the club against him may be misinterpreted as a judgment on the club’s part as to his guilt at a time when he steadfastly maintained his determination to plead not guilty and fight the charges.

On that basis I recommended to the Board that Mr Johnson should be allowed to play for the club, pending trial.

Mr Johnson’s victim has endured a terrible ordeal and for that I am truly sorry.

At no time was the failure to suspend him again intended to cause any harm or distress to her or her family.

I recognise that, as CEO, my involvement with Mr Johnson and the decision to allow him to continue to represent the club was a serious mistake.

I sincerely regret that this error has impacted on the victim, the club, its supporters and all those affected in such a devastating manner.

Sunderland AFC has a long and proud history.

To see the criticism levelled against it in the last week, and the effect that has had on its staff and supporters in light of this decision, has hurt me deeply.

To this end and for the long-term good of the club and its staff, I have stepped down as CEO with immediate effect.

I thank everyone at Sunderland AFC for their support over the last nine years.

‘The Board of Sunderland AFC has today accepted the resignation of Margaret Byrne.

‘Margaret, in her role as CEO, was responsible for the running of the club. She was also accountable for the actions taken by the club in relation to Mr. Johnson.  Sunderland AFC acknowledges that Margaret’s intentions have always been to act in the best interests of the club, however it has become clear through our own internal investigations that in this instance decisions have been taken by Margaret in error.

”Whilst swift and decisive action was taken to terminate Mr. Johnson’s employment upon his guilty plea, decisions taken prior to this, including the decision not to suspend him for a second time pending the outcome of the trial, were wrong.  In light of what has been acknowledged by Margaret as a serious error of judgment on her part, we have undertaken a full review of the club’s decision-making processes to ensure that there can be no such mistakes in the future.

‘Throughout this deeply regretful situation, we recognise that one devoted young fan and her family have been very badly let down, first and foremost by Mr. Johnson and his despicable actions, but also by the club they support. We are so very sorry for this.

‘Mr. Johnson lied to the club; he also lied to our fans and they have every right to feel aggrieved by this. Lessons have been learned and we hope that the club and its fans can move forward from this together.’